Sadly, boxing has been touched by tragedy again, in just the first week of the New Year. Japanese Super-flyweight boxer Tesshin Okada, 21, died on 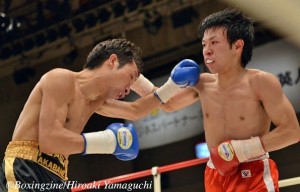 Monday after becoming ill following his 4th round tko defeat by Masafumi Kamiyama, 32, at Tokyo’s Korakuen Hall, on December 20th. Both fighters had been making their debuts in what was a scheduled 4-rounder, and the referee stopped the fight in the last round. Okada was taken to hospital following the fight’s conclusion, and was operated on for a brain hemorrhage. This is another example of the risks involved in boxing, and why all boxers deserve our utmost respect, no matter what their achievements, how many fights that they have, or how many wins or losses they might score. RIP Tesshin Okada.