Frankie Campbell (33-4-2, 26 KO’s) Born: 1904, Died: 8-25-1930 This is one of the most horrific deaths in the sport.  Campbell died after having his brain separated from the connective tissue inside the skull, a result of punishment sustained in a fifth round TKO loss to Max Baer.  The injury is said to have occurred as early as the second round, when Campbell stated to his … END_OF_DOCUMENT_TOKEN_TO_BE_REPLACED

Sadly, boxing has been touched by tragedy again, in just the first week of the New Year. Japanese Super-flyweight boxer Tesshin Okada, 21, died on Monday after becoming ill following his 4th round tko defeat by Masafumi Kamiyama, 32, at Tokyo’s Korakuen Hall, on December 20th. Both fighters had been making their debuts in what was a scheduled 4-rounder, and the referee stopped … END_OF_DOCUMENT_TOKEN_TO_BE_REPLACED 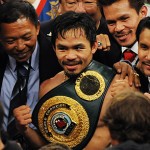 by Jim McGrady Sadly we start this week, and the new year, with yet another boxing related death. Japanese super flyweight Tesshin Okada (0-1) passed away Monday due to a brain hemorrhage suffered in his professional debut on a December 20th card against Masafumi Kamiyama (1-0, 1 KO), who was also making his pro debut. Okada was stopped 22 seconds into the fourth and final … END_OF_DOCUMENT_TOKEN_TO_BE_REPLACED