Sadly we start this week, and the new year, with yet another boxing related death. Japanese super flyweight Tesshin Okada (0-1) passed away Monday due to a brain hemorrhage suffered in his professional debut on a December 20th card against Masafumi Kamiyama (1-0, 1 KO), who was also making his pro debut. Okada was stopped 22 seconds into the fourth and final round. He was 21 years old. 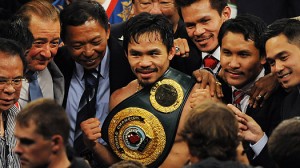 Word is, former welterweight champion Manny Pacquiao (55-5-2, 38 KO’s) is trying to decide whether he wants WBO light welterweight title holder Ruslan Provodnikov (23-2, 16 KO’s) or WBO welterweight champion Timothy Bradley (31-0, 12 KO’s) next. Last month, Provodnikov and former WBA lightweight champ Brandon Rios (31-2-1, 23 KO’s) exchanged tweets about setting up a fight between themselves; wrote Rios, “@RuslanProvod you are ready I m ready we have to make a fight”, to which Provodnikov replied “@Brandon_Rios1 I agree we can make a great fight… I’m ready..” Pacquiao beats Bradley or Provodnikov, but Rios against either one makes for an entertaining match up.

The slow and steady return to TV
It’s been a slow return to live boxing since the holidays, but we’re getting there. Though the “big” networks have nothing up for viewing, there are at least two live shows this weekend being aired State-side. Friday Night Fights airs Friday on ESPN, headlined by super featherweights Juan Antonio Rodriguez (25-4, 23 KO’s) facing Yenifel Vicente (25-1-2, 17 KO’s), and Saturday Night, Unimas airs Solo Boxeo Tecate, featuring former world lightweight champion Antonio DeMarco (29-3-1, 22 KO’s) matching Jesus Gurrola (20-5-3, 9 KO’s). Both Showtime and HBO are back in action next week, with ShoBox airing the night of the 17th and HBO’s World Championship Boxing on the 18th.