Despite a media that rocks kickin’ pairs of mandals, sports fanny packs, and is as wishy-washy metrosexual as the male clientele at a Berkeley, CA GAP, there’s still plenty of country boy, “keep him down on the plantation” thinking in boxing.

As if by promoter-funded osmosis, the boxing media seems to have developed a hard-line stance on labor relations. Even the grandest liberals of the bunch, who in their “real” life swim in the rainbow-colored water awesomeness of their own bleeding hearts get all catty and mean girl when it comes to fighters looking to leverage their 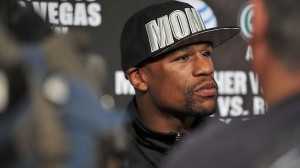 fame for a chance at more money, better working conditions, and a greater amount of self-determination.

And this pro-power broker, anti-labor stance goes beyond simple contracts, drifting into the general idea that fighters should do as told and shut the hell up about everything else.

Nowhere is this attitude more prevalent than with Floyd Mayweather, five-division world champ, pound-for-pound top something or other, and scourge of the favor-bartering media.

You’d be as rich as Mayweather, himself, if you got a nickel every time some Cheeto-munching writer decided to level the champ with their brutal wit and/or precious expertise.

“You say Pacquiao is 1-2 in his last three and that’s why he doesn’t deserve a bout, but Amir Khan DOES deserve one with a 2-2 record?”

Clever…as if the Twitter-hugging blogger in question had uncovered a unique truth…as if the entire boxing world doesn’t specialize in double-talk and convenient logic manipulation.

But in the case of Mayweather, boxing double-talk is taken for dumbness, stupidity. Arum, Schaefer are shrewd. Mayweather is a moron.

“He just can’t see how stupid he is…how wrong he is.”

Yeah, it must be that. Yeah, it must be that the guy who has mastered an extremely cerebral style of fighting and is advised by some extremely shrewd business men is actually a potato chip-munching moron just waiting to be schooled by the collective wisdom of a group that don’t even really know the ins and outs of the sport they’ve chosen to cover.

Is it the broken English Mayweather occasionally uses? Ebonics? What, exactly, is it that makes the cast of underachievers in the boxing media assume a position of intellectual superiority over someone who has worked his way to the top of his chosen profession?

Boxing writers, heavily Caucasian, upper middle class, and focused on manly fairy tales of noble warriors who live in a world beyond mundane things like having to pay one’s bills, have always bristled at the young black man who talks big and lives flashy. In their eyes, grunting warriors with dirty sweatpants and furious slave anger are considered the “real” heroes; Smiling and confident boxers with a “new-rich” lifestyle and an “I’m just as good, if not better than you” swagger are cads (or, as the managing editor of one major website said in reference to Mayweather, “Uppity”), who need to be brought down a few pegs. From Jack Johnson to Muhammad Ali to Mike Tyson, the media rejoices in the fall of “uppity” fighters who “don’t know their place.”

And the line is long to bring Floyd Mayweather down. It’s been long ever since he left the protective, siphoning embrace of Bob Arum for a run at independence.

It’s been mentioned in these pages many times before that there seems to be a subliminal drive in boxing to keep fighters dependent on the sport’s power brokers. Conversely, those who break free and try for a run at independence tend to be targeted and brutally put in “their place” with the media often serving as the henchmen.

Mayweather, for now, has broken that mold and is thriving in his independence. He openly mocks a media accustomed to a quid pro quo relationship with fighters and doesn’t hold back in letting them know that they are there to see him and not the other way around. He is the reminder that he is who he is and they are who they are.

Being fair and even-handed when dealing with difficult subjects has never been a strong point of the media. As a matter of fact, these self-obsessed wannabe wordsmiths won’t even lend a cyber hand to those they really do like.

Yet, you’d be hard-pressed to find a single word of warning or ounce of investigative aid to Manny from the usually intrusive media. Not even a bit of focus on what generation after generation of precedence tells us might be in store for the Filipino icon when the fight money stops flowing in and it’s not in anyone’s best interest to keep him temporarily well-fed.

Pacquiao, has been a “good” boy. He follows the mold of old time fighters, who just wanted to fight and let the suits handle the business. Of course, this has always been a bad business decision for fighters, but who said boxing was ever about being fair to the fighter? Pacquiao, like many, many others, is the money-earner and the star, but will be instantly tossed aside and drained of everything he has as soon it’s determined that he has no more to give.

The moral of this story is that, whether a fighter chooses to be the good company boy or the runaway slave,  the prime objective always seems to be:  make sure that the fighter is kept as dependent on the power brokers as possible and that he never leaves the game on equal terms with those who “owned” him. It’s also clear that the media’s primary role in this is as henchman, executioner, angry farm hand with vicious dogs pulling on a leash to track down those who dared to try and escape.

Whether you admire Floyd Mayweather or hate his guts– and there’s plenty out there to justify both feelings– it has to be acknowledged that he is beating the sad tradition of indentured servitude in boxing and doing it without the help of a media that should be on his side.

But the media is all about holding on to what little power and privilege they do have. That’s why they will forever be on the side of the traditional power brokers. And that’s why they will continue to look down their noses at any fighter who doesn’t stay “in his lane” as a hired beast made for fighting and then discarding.

You can email Paul at paulmagno@theboxingtribune.com or watch as he skillfully wedges in the word “ephemeral” in each of his next six articles.. You can also buy his book, Notes from the Boxing Underground! Paul is a full member of the Burger King Kids’ Club, a born iconoclast, and an ordained minister in the Universal Life Church.