Rising Polish heavyweight Artur “The Pin” Szpilka (16-0, 12 KOs), who has been known to make ring entrances in an orange prison jumpsuit (a reference to his soccer hooligan past), was turned away by the Department of Homeland Security in the USA as he attempted to enter the country to prepare for a HBO televised bout with 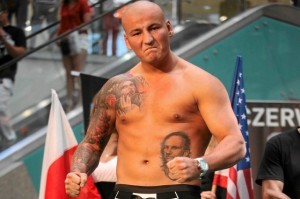 Szpilka has done jail time in Poland in the past, something which may have seen him flagged as he landed at Chicago’s O’Hare Airport and attempted to enter the USA.  He has often spoken of wearing his trademark prison jumpsuit both as a tribute to those he did time with, and a reminder of where he’s come from.  At any rate, the fighter was told by Customs officials that he did not have the proper documents, and would be refused entrance until he had them in his possession.

Szpilka, 24, was then sent back to Poland.

“I have not slept in 24 hours, but I’m going to train. I need only eight days for acclimatization [to another country],  so I have more than I planned. If I go, I’ll be happy, and if not, then I will have to make a living somewhere,”  a stoic Szpilka said to the web site bokser.org once back in his native country.

In a prepared statement, Jennings’ promoter Gary Shaw expressed hope that his fighter would still meet up with the charismatic Pole as planned.

“Team Jennings along with myself and (Jennings co-promoter) Antonio Leonard are well aware of the visa problems Szpilka is having at the moment,” Shaw explained.

“We are monitoring the situation very closely with Warriors Boxing promoter Leon Margules and hope this problem can get resolved very fast.

“This is a great fight between two undefeated ranked heavyweights and it would be disappointing if they are not able to fight. We are working endlessly to get Artur’s proper documents approved so they can meet Jan. 25 on HBO.”

Szpilka is no stranger to American boxing audiences, having fought here a total of six times.  His last appearance in the USA was a 5th round TKO win over US heavyweight Mike Mollo at the U.S. Cellular Field, Chicago, Illinois, in August, 2013.