Los Angeles based Ukranian Ivan Redkach (15-0, 13 KO’s) will put his undefeated record on the line against Tony Luis (17-1, 7 KO’s) this Friday, headlining the return of Showtime’s ShoBox program from the Cook Convention Center in Memphis, Tennessee. 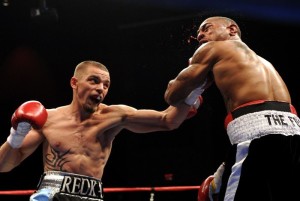 The heavy-handed southpaw has been featured in Lou DiBella’s Broadway boxing cards, and is considered by many to be one of the lightweight division’s top prospects. His aggressive style and hilight reel knockouts have earned him a reputation as one of the “guys to watch” in 2014, his punching power has been compared by some to that of Gennady Golovkin and Sergey Kovalev. An impressive performance on Friday’s nationally televised broadcast could move him up the ladder to bigger fights against the major players of the division. A win over Luis, who is ranked number nine by the WBA as a super lightweight, will also earn him the now vacant USBA lightweight title.

The once-beaten Luis has fought the last few years as a light welterweight, holding the WBC Continental Americas light welterweight title for a brief stint. His lone defeat came early in 2013; an eighth round TKO at the hands of Jose Hernandez. Luis came back to win two six round decisions over mediocre opponents to end the year. His career has been based mainly in Quebec, Canada with a handful of bouts in upstate New York.