“Fast” Eddie Chambers (36-4, 18 KOs), one of boxing’s truly nice guys, has been riding a career roller coaster over the last few years. 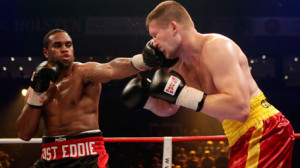 The heavyweight was so disgusted with a disputed loss to Polish warrior Tomas Adamek in mid 2012–Chambers injured himself early in the fight, fought mostly one-armed, and still appeared to many to get the best of Adamek—that he decided to abandon a heavyweight quest that included wins over former WBC world champion Samuel Peter and giant Ukrainian turned German fighter Alexander Dimitrenko, along with a crushing loss to IBF, WBA and WBO world champion Wladimir Klitschko, which included a devastating late knockout that sparked rumors about Chambers’ health in the aftermath.

Now, Chambers has made the rather surprising decision to not only return to the heavyweight division, but to do it under the auspices of Team Fury, which includes the so far undefeated, giant battling cousins Tyson–the guy who does a lot of verbal jousting via social media–who at 25 years old and 6′ 9″ tall sports a record of 21-0 with 15 KOs,  and his younger, quieter counterpart Hughie, 19, who stands at 6′ 6″ and is 12-0 with 7 KOs.

Chambers will be trained by Hughie’s father Peter, who also handles the Anglo-Irish cousins’ rising careers.

In a prepared statement and an accompanying video, Chambers makes it clear that he is back to crusade as a heavyweight, this time based not in the United States, where he has often complained of feeling under-appreciated, but the United Kingdom.

“I am happy to be part of Team Fury Promotions,” says “Fast Eddie.”

“Being with Peter Fury and part of Team Fury is going to take me to the level Peter knows I’m capable of.

“They have the right resources and boxing knowledge that I feel has been missing in my career so far. I’ve had some great trainers in the past; however, I think with Peter’s great knowledge in the ring and also his business knowledge out of the ring, it gives me the confidence and inspiration I need to believe us as a team can do big things.

“I can’t wait to fight in the UK for all the boxing fans there. I have a message to all heavyweights in the world – Eddie ‘Fast’ Chambers is coming for you soon.”

Peter Fury also says he couldn’t be happier to make this addition to Team Fury, and says he plans to see Chambers bulk back up from cruiserweight carefully under his guidance.

“I’m over the moon to have the great pleasure of working with Eddie Chambers,” says the trainer.

“For some years I have always admired the boxing skills he possesses as a fighter. Having the trust and opportunity to challenge myself again is great. I love the American fighters of the past and am really excited to show the world what Eddie can achieve in world heavyweight boxing.

“He will be competing at heavyweight. I intend to put him up by 24lbs which will make his weight around 105kgs [approximately 231 pounds].”

According to Peter Fury, Chambers also hopes for increased exposure in the UK by working with both promoter Mick Hennessy and by appearing on Frank Warren’s BoxNation network.