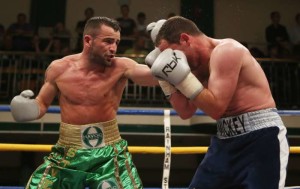 and questionable 10 round decision to Appleby in March of 2012, but has since come back to win his last five outings, winning both the WBU and WBO European titles in the process.

According to Irish-boxing.com, Frank Warren is interested in bringing a card to Dublin in April, and Ormond wants his rematch with Appleby on that show. Appleby is promoted by Warren, so getting him on the card shouldn’t be difficult.

Appleby (19-5, 11 KO’s), started his career as an undefeated prospect in the division, winning the BBBofC British featherweight title in his 11th pro bout, and was 14-0 in early 2009 but has since suffered multiple setbacks, and tallied a record of 5-5 over the last five years, including a short stint as the BBBofC Celtic super featherweight champion, the title he won when he defeated Ormond.