As boxing fans, we know that there aren’t always fights on television. Even on nights when the main networks are airing fights, we can’t be guaranteed that the fights will be any good. For lonely evenings when YouTube clips set to unlicensed music aren’t doing the trick, some of us must turn to Netflix, and particularly in my situation: Netflix Streaming.

In this weekly column, I will wade through the many boxing films and documentaries that are available to watch now, and I will give my fair and honest review of these films. Some of these movies look to be pretty good. Many of these movies promise to be horrible. I do this for you, dear reader, so that your weekday nights could possibly not be so boring.

For the first week, I have chosen what looks to be a pretty good film about the Afghan Women’s Boxing Team:

“This is the first time an Afghan girl stands in the ring. From a country where every corner is in ruin.” 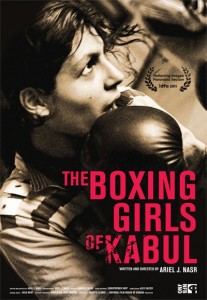 Ghazi Olympic Stadium in Kabul, Afghanistan. The same Olympic stadium where, only a decade earlier, women were executed for whatever little infraction was deemed a capital offense by the patriarchal Taliban government.

I have an odd relationship with Afghanistan. As an Army veteran, I have felt my share of loss over the years as I learn about another friend dying overseas. Without human interest stories like these, it could be very easy for me to turn my back on the entire country and leave them to their own devices. Not that my opinion matters, but I consider myself left of center, and if I’m sick of Afghanistan, then I imagine the regular Joe on the street probably cares even less.

But here we are, and I can’t help but feel when watching The Boxing Girls of Kabul, that I wish more could be done. The documentary centers around Mohammed Sabher Sharifi, the trainer of the women’s team, and three of his pupils, as they work toward gaining spots in the 2012 Olympics. Sharifi was once a promising amateur, and was invited to compete in the 1984 Summer Olympics in Los Angeles–a dream cut short when the Russians invaded his country.

Throughout the documentary, you can’t help but feel that Afghanistan has been a country of interrupted potential: first the Russians, then the Taliban, and now the Americans. It’s the Taliban and the lingering specter of their oppressive policies that presents the biggest hurdle for these women. While their parents encourage them to pursue their dreams of equality and athletic achievement, their neighbors, brothers and cousins question their decisions. Women’s Boxing is barely a blip on the radar of American sports, and even though The Boxing Tribune runs a weekly roundup of Women’s Boxing, the sport still fights to gain an audience. The state of Women’s Boxing is even worse in post-Taliban Afghanistan. It hasn’t been all that long since women were expected to wear burkhas, were forbidden to hold jobs, drive, and attend school. Many people in Afghanistan still cling to some of these beliefs, either from force of habit, or fear of the return of the Taliban. Still, these women fight on. Even with continued violence against women in the outlying provinces (where girls literally get acid thrown into their faces while waiting in line for school), these courageous women battle against gender barriers in the most masculine of sports, determined to claim glory and show their countrymen and women that they are equal.

The problem is that they just aren’t very good.

An early shot of Sharifi clumsily working on the speedbag is a good portent of things to come. The team has little to no funding. They have little to no equipment. They don’t even have a ring. In fact, the first amateur fights for the team don’t come in the form of gym smokers, or Golden Gloves. No, they are thrown into the fire at the 2009 Asian Indoor Games in Hanoi, Vietnam, and it is literally the first time these brave women have stepped into an actual boxing ring.

For those of us who know boxing, watching the action inside of the ring is painful. The poor Boxing Girls of Kabul are at a serious disadvantage. One can’t help but wish you could take the team, trainer and all, and plop them down for a couple of months in a sweaty Mexican gym so that they can get some real training, against real competition. Even just giving them a stack of DVDs of the previous year’s best fights as study material could help. I mean, these girls don’t even have a ring, and they definitely don’t have a pool of competitive amateurs to learn from before they hit the main stage.

I wish I could say that the movie has a happy ending. My Western sensibilities ache for some hope at the end. But following a loss, one of the girls realizes for herself that their facilities leave them at a disadvantage, and that her trainers don’t possess the necessary boxing knowledge to prepare them for an event like the Olympics. A quick search through Google will reveal the results of their 2012 Olympic dreams. And even sadder, a quick perusal of current events reveals that the Afghan military is either ill-prepared, or unwilling to face the Taliban, who blend in on the streets and threaten those who wish to push for a more progressive Afghanistan.

Still, at 52 minutes, the movie doesn’t take a lot out of your day, and you’ll hopefully view a people we’ve viewed as enemies for the better part of the last decade with more compassion. Also, we boxing fans always love to root for the underdogs, so if that’s your thing, then this movie is right up your alley.

The Boxing Girls of Kabul, like everything in this column, is available to view on Netflix Streaming. Be advised that there are a couple of rough scenes of actual footage of Taliban cruelty toward women, including an execution of a woman in the Olympic Stadium from November of 1999. It’s a brief moment, but it is also real life and hard to watch.

Join me next week as I review the Max Schmeling biopic Fist of the Reich, directed by Germany’s Ed Wood: Uwe Boll. I foresee horrible things for those of you willing to take the plunge with me.