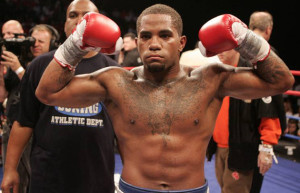 Atlantic City, New Jersey.  Majewski entered the fight with the reputation of being a tough customer, but was simply unable to handle Stevens explosive power.  Stevens had said before the bout that he wanted to get back to the kind of form which saw him score three 1st round knockouts, in his four fights, prior to meeting Gennady Golovkin, and this is exactly what he did.

From the start Stevens came forward in his usual aggressive manner, while Majewski, known as a slow starter, looked to use his extra range, and land his jab.  Stevens had Majewski down from a jab with just seconds gone in the fight.  Majewski regained his feet quickly but was soon down again from a two fisted onslaught from ’Kryptonite’.  Once again, ’The Machine’ regained his feet, and didn’t look particularly hurt, but another flurry from Stevens had Majewski down on his knees by the ropes, and at this point the referee waved the fight off.  ‘Showtime’ as Stevens now likes to be called, rather than ‘Kryptonite’, was back, with an impressive display of power punching.  While Majewski is no Gennady Golovkin, he has a solid record, and has never been beaten in such a manner before as he was last night by Stevens.

Now he is back on track with a win Stevens looks like he will be aiming for one of the other world middleweight titlists in the near future, with post fight talk mentioning WBO title holder Peter ’Kid Chocolate’ Quillin, as a possible opponent for Stevens.  If that was to happen it would certainly be an interesting and entertaining fight.

On the undercard to Stevens vs. Majewski, Cruiserweight Thabino ’The Rock’ Mchunn (14-1, 9kos) who in his last fight upset Eddie Chambers, picked up the NABF Cruiserweight title, by out pointing Olanrewaju Durodola (15-2, 14kos) over 10 rounds.  Mchunn was always one step ahead of Durodola, with his fast hands and reflexes negating most of the big punching Durodola’s attacks.  Durodola was down briefly in the 2nd, and Mchunn was in control of the fight, for most of the time after that round.

At light-heavyweight Roberto Acevedo (8-1, 5kos) pulled off an upset when he koed the highly touted prospect Ilshat ’The Sheriff’ Khusnulgatin (10-1, 6kos) in the 1st round.