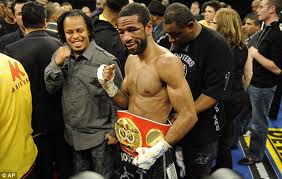 A bone-dry Lamont Peterson came into the first round looking to establish his jab and get a feel for Jean, who came in sweating as if he was in the sixth round. Jean was able to land his counter right over Peterson’s jab, forcing Peterson to look to double up on his jab. Jean started landing his right hand more late in the second round, and made a big statement just before the bell.

Jean landed a big right hand a minute into the third round and looked as if he was taking command in the fight. Peterson answered back by sitting in the pocket and throwing more power shots to Jean’s body. Jean continued to land his right hand, but he took several big rights and left hooks from Peterson in return. Peterson took back the momentum in the last minute as he landed a big left uppercut and followed with several more rights before the bell sounded.

Peterson’s left hook made an impact again in the fourth, as Peterson landed to Jean’s body and jaw after eating a Dierry Jean overhand right. Peterson, who spent much of the first three rounds, started moving forward and moving Jean back with his punches. As Peterson’s left hooks to the body started to wear on Jean, Peterson was able to mix in uppercuts and bolo punches.

The tide was clearly in the champion’s favor by the end of the fifth, when he backed away from Jean and allowed him back to the center of the ring. Peterson opened up with a flurry of body shots at the bell. Peterson came out with two guns blazing in the sixth, starting the round with another flurry to Jean’s body. He stalked Jean, who got on his bike and moved from rope-to-rope. When Peterson had Jean trapped along the ropes he really sat down on his punches and blasted away at Jean’s body. Peterson did most of his work to Jean’s body, and only occasionally ripped him upstairs with his left hook. A small cut opened on the side of Jean’s right eye at some point in the sixth round.

The punishment continued into the seventh round when Jean was unable to do more than land the occasional right hand. Peterson stalked him around the ring, momentarily pausing and squaring himself up before going to work. Peterson landed a 1-2-3 that momentarily stunned Jean.

Jean started round eight with a short burst of offensive output, but Peterson was back in control by the end of the first minute. Peterson continued to control the pace until the midway point of the round, when Jean started landing his right hand at the end of his combinations. Jean kept control until the bell sounded to end the eighth. Jean’s momentum was short lived, however, as he came out in retreat mode again in the ninth round. Peterson was not as aggressive, and momentary lapses left openings for Jean to land big right hands late in the round.

Peterson continued to stalk Jean in the tenth round, going back to work on Jean’s midsection. Jean stood his ground and exchanged with Peterson in the middle of the ring. The fight was stopped for a minute when Peterson landed a left hook on Jean’s hip. When the fight resumed, both fighters returned to center ring and traded blows. Peterson did a good job of slipping a lot of punches in those exchanges.

The last two rounds were uneventful, as Jean accepted the role of prey to Peterson’s hunter. Peterson continued to control the pace, but he never pressed for the knockout. When the final bell sounded, Peterson still had a lot of spring in his step as Jean sauntered back to his corner. Ringside judges scored the fight 115-113, 116-112, and 118-111 in favor of Peterson. The Boxing Tribune scored the fight 118-110 in favor of Peterson.

After finding his rhythm and settling in early on, Charlo was able to move around the ring and counter Rosado before moving back out of danger. Rosado, who continually pressed the action, was unable to cut off the ring while stalking forward and walking into heavy shots. And in what is becoming a common occurrence in Gabe Rosado fights, a nasty cut opened up over his left eyelid in the fifth round.

With blood trickling from a cut over his left eye, Rosado turned up the heat in the eighth round. Charlo continued to circle the ring and pop Rosado with his jab, and when against the ropes or in the corner he’d land a big shot and dance out of danger. Rosado was able to land more punches, but he was never able to seriously hurt the undefeated Charlo. Rosado’s right hand landed more often in the eighth round, but Charlo often answered with a left hook of his own.

Rosado continued to press along into the final round, but he was unable to cut the ring off from an increasingly mobile Jermell Charlo, who continued to moved to safe grounds, set his feet and let his hands go. To his credit, Rosado had success with his right hand, and even appeared to momentarily stun Charlo with a right hand in the middle of the round, but he once again ate a left hook in return.