In these dark, vulgar pages of the Monday Rant, we’ve gone after everyone from boxing’s promoters, matchmakers, and governing bodies right down to the infected segments of the boxing media…and we have the battle scars to prove it.

But it’s not just the creeps who are keeping things like honesty and fair play from the sport of boxing. 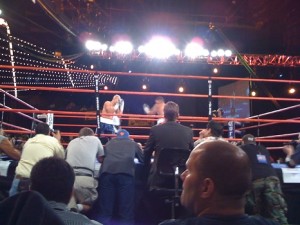 For every douche bag with an eye on graft in the sport we love, there are thousands of willing accomplices who don’t have the courage of their convictions or the general resolve to stand up for what’s right.

And in case you’re slow on the uptake, I’m referring to the fans.

Imagine having a Burger King on your corner that only sometimes gives you what you want. Sometimes the Whopper with cheese would be in the bag, sometimes it’ll be a Whopper without cheese, sometimes a fish sandwich, sometimes a sopping-wet sponge from their kitchen. Now, imagine that same Burger King being run by an arrogant, sleazy creep who mistreats his workers and has the audacity to tell you that he decides what you want and that if there’s a sponge in your bag, it’s because that’s what he decided you should have…oh yeah, and the prices are going up tomorrow.

Customers, even the most Whopper-addicted sad sacks, would be crazy to patronize that Burger King, Yet, in boxing, fans are disrespected similarly and always come back for more.

From rotten judging to corrupt governing bodies to all the other crap that exists on the outskirts of the boxing red light district, fans are asked to swallow it and keep buying. And, for the most part, they do just that.

Boxing fans have been conditioned to accept graft and incompetence as part of the game. But could it be that boxing fans get the short end of the stick because they’ve proven themselves a finicky, relatively disloyal bunch to begin with?

Most everyone will acknowledge that the boxing media is in a sad state. With some major sites owned by promoters and the majority of the rest almost completely funded by promoters, most fans recognize that what we get these days is more along the lines of public relations than news. However, fans still flock to compromised websites, even those where blatant publicity outnumbers genuine news items by at least a 10 to 1 margin.

Fans allow the media to make the sport’s heroes and villains, jumping on to specific bandwagons without giving much thought as to whether there’s actually much difference between the warriors they love and the cherry-picking bums they loathe.

And heaven forbid a pug attempt to actually earn the respect of his critics by changing his ring style or fighting those he has been accused of ducking. Instead of an “attaboy” or “nice try,” expect the criticism to get even meaner, more personal.

When fans became outraged at the pampered “Canelo” Alvarez being led away from an awkward showdown with Austin Trout, the young fighter put his foot down and demanded the champ vs. champ contest. After beating Trout in an ugly, less-than-scintillating bout, he went ahead with another extremely tough stylistic match-up and wound up getting a one-sided boxing lesson from pound-for-pound best, Floyd Mayweather.

Instead of being lauded for insisting on making the move away from easy wins to bouts with the division elite, the criticisms are now worse than ever.

How many other fighters could fight Austin Trout and Floyd Mayweather, back to back, and look good doing it?

Alvarez is paying the price for having listened to the fans and for having made the effort to appease them. And while Gennady Golovkin continues to beat the Beshbarmak out of a motley crew of hand-picked second and third-tier pretenders to the fawning acclaim of fandom, Alvarez gets the virtual lynching.

This certainly gives an explanation for why promoters tend to not mine public opinion polls when it comes to how they match their fighters. Fans frequently say one thing, but do another.

But this goes beyond fans’ media preferences and how heroes and villains are made.

A jaded, finicky fan base is at the bottom of most of boxing’s problems. As consumers that refuse to engage in any sort of quality control, they tend to get used and abused for the amusement and financial well-being of the sport’s puppet masters.

Maybe it’s not fair that we ask more of boxing fans than fans of any other sport. A fan should really only be concerned about tuning in and enjoying the show.

But as all followers of the sport know, boxing has no real independent media to push for reform and no centralized authority to implement reform. Left to its own resources, boxing just drifts in the raw sewage that constitutes its working power structure, occasionally doing right by the fans and athletes, but more often doing what has to be done to keep the sport’s power brokers in power.

Everyone in boxing with an agenda to push or a scheme to hustle counts on an uninformed fan base. They count on fans not knowing the truth about a particular subject and not caring enough to investigate for themselves. They prey on fan ignorance, so it’s always in their best interest to keep the fans in the dark.

Whether its some wannabe hotshot writer scoring side deals for himself while intentionally misleading his readers or a group of supposedly benevolent rankings reformers lying by omission as to the nature of their voting process, the common denominator is that, in boxing, the truth is something to be circumvented rather than embraced.

Boxing fans, if their goal is to enjoy a sport that conducts itself like a sport and treats its athletes like real athletes, need to be alert. They need to be fair-minded, well-informed, and willing to exercise their ultimate power as consumers.

On the other hand, if all they want is some blood, mayhem, and macho posturing, then nothing else needs to be done. Just learn to tolerate a sport that will continue to insult their intelligence while feeding off their hard-earned money.

Revolution and reform in boxing will only come via fan demand. The question is whether fans really want it.

You can email Paul at paulmagno@theboxingtribune.com or watch as he spends the remainder of 2014 blogging about pretty things.  You can also buy his book, Notes from the Boxing Underground! Paul is a full member of the Burger King Kids’ Club, a born iconoclast, and an ordained minister in the Universal Life Church.