Victor Ortiz (29-4-2, 22 KOs) returns from a 19-month layoff Thursday night when he takes on former WBA champion Luis Collazo (34-5, 17 KOs) in a welterweight fight at the Barclays Center in Brooklyn, New York. Fox Sports 1 will broadcast the match as part of Golden Boy Promotions fight series with the network. 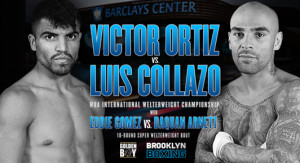 Ortiz last fought in June, 2012, against Josesito Lopez. The bout was an all-action affair until a broken jaw forced Ortiz to retire on his stool in round 9. It was the second time he refused to continue in a fight (the first being against Marcos Maidana in 2009) and many wondered if he possessed the heart needed to compete in boxing. But multiple surgeries to reconstruct his jaw have validated the seriousness of his injury.

While recovering, Ortiz enhanced his exposure by competing in ABC’s “Dancing with the Stars” and accepted a role in the upcoming film “Expendables 3”. The former WBC title holder returns to the ring with new trainer Danny Smith; who’s known for his work with Fernando Vargas.

Collazo’s on a three fight win streak. In September, he dominated 22-year-old Alan Sanchez to win a unanimous decision in San Antonio. Best known for his controversial losses to Ricky Hatton and Andre Berto, and his battle with Sugar Shane Mosely; the Brooklyn native is no stranger to the big stage.

The 32-year-old Collazo is the quintessential boxer who isn’t afraid to mix it up. Ortiz on the other hand pushes the action and as we saw in his fight with Floyd Mayweather, he can be recklessly aggressive at times. Although Ortiz is the favorite going in, don’t look for Collazo to lay down in front of his hometown crowd.