There’s always been a part of me that likes rising Anglo-Irish heavyweight Tyson Fury (21-0, 15 KOs).

I interviewed him via telephone once from his home in the UK and found him to be knowledgeable about boxing and a generally fun guy to talk to. 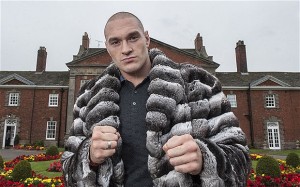 He didn’t seem to take himself too seriously even when he was bragging up a storm.  He seemed to self-consciously realize how bombastic he sounded. Fury told me he’d quit boxing if Canadian heavyweight champ Neven Pajkic (17-1, 5 KOs) gave him any trouble at all.

Well, Pajkic ended up flattening Fury, who got away with some rabbit punches and a quick referee stoppage by Phil Edwards against a Pajkic who later said he was also battling a nasty bout of food poisoning that night. On the pro-British site Boxrec, this is what is written about the Fury – Pajkic bout.

“Neven “No Surrender” Pajkic fought Tyson Fury in Manchester, England for the latter’s Commonwealth heavyweight title November 12th, 2011 and scored a stunning knockdown of the Manchester Goliath in the second round, then hurt him again seconds before the end of the round, Fury being saved by clutching and hanging on for dear life. Pajkic attacked again in round three and was pummeled and wrestled to the canvas. When he regained his feet, instead of back-peddling, he attacked the huge specimen in front of him and was cuffed and pushed to the canvas again. Again he rose up and attacked Fury, only to have an over-anxious referee step in and award the match to the local lad.”

Despite what he’d said to me about Pajkic giving him any sort of challenge, Fury, of course, boxed on. No surprise there.

There actually seems to be a bunch of different Tyson Furys.  The engaging guy I spoke with is one.  The guy who indulges in nasty homophobic rants on social media is another.  As is the guy who speaks out at press conferences unless people he’s ripped, like ex-champ Lennox Lewis, happen to be in the room.  Then Fury becomes reticent.  And then there’s the Fury whose actual ring performances are mixed at best.

But in this writer’s mind, Fury (all of them) went over the line and made a fool out of himself this week when he could have gotten some public sympathy.

After all, Fury had just suffered through two wasted training camps when David Haye, with whom he’d signed for a lucrative British heavyweight showdown, twice pulled out with rather “convenient” last second injuries.  One has to remember that Haye has had very mixed results against big men like Nikolai Valuev and Wladimir Klitschko, and Fury is 6′ 9″ tall. Fury has some strong words for his veteran heavyweight countryman, and who could blame him?

Fury should have stopped there, and left well enough alone.  Been a sympathetic figure for once.

But it seems such a thing is not in Fury’s nature. From Haye, Fury launched into an unprovoked attack on WBC heavyweight champion emeritus Vitali Klitschko, who has of late been taking on pro-Russian forces in his country of Ukraine as the political leader of the pro-Western, pro-democracy UDAR (“Punch”) party. This ultimately pits Vitali in the dangerous situation of going against the wishes of Vladimir Putin, who rules Russia with an authoritarian iron fist.  Klitschko has already been engaged in some very risky street actions in Kiev, Ukraine’s capital.

But Fury didn’t have the class to acknowledge any of that.  Instead, he implied that Vitali retired to “emeritus” status merely to avoid him, that Vitali Klitschko was actually afraid of Tyson Fury. Let’s remember that during an impressive career, Vitali was never knocked down, much less out.  He is virtually tied for the highest knockout percentage in heavyweight history with Rocky Marciano.  He never trailed on the scorecards at the end of any fight, even his “losses” due to injury.  Vitali also came back after a 3+ year layoff due to injuries to take the WBC title back from Samuel Peter, who (though many who touted him have amnesia about it now) was once feared in the division even though time (nor the Klitschkos) has not been kind to him.  Vitali made Peter quit on his stool.  This kind of sporting comeback is rare, indeed.

Vitali also took huge shots from some of the divisions biggest punchers, Lennox Lewis and Corrie Sanders, and kept on coming. And we’re to believe by Fury that Vitali left boxing because he was afraid of a guy who was knocked flat by an ailing and obscure Canadian champion and by a former cruiserweight in Steve “USS” Cunningham, who knocked Fury on his butt in the giant Brit’s USA debut.. Yes, Fury came back to win those bouts.  But can anyone imagine Vitali Klitschko being knocked down by those men?  Or by Tyson Fury, for that matter?

In fact, at his peak, I think Vitali would have given anyone in the history of the heavyweight division some major problems. But Fury couldn’t take the opportunity to show some respect for the ex-champ, to wish him well in his political endeavors (even controversial Brit Dereck “Del Boy” Chisora, who once slapped Klitschko at a weigh-in, has done that, saying he would now vote for Vitali if he could, and respects what he’s doing).

Instead, Fury came out with well-worm putdowns like saying he was glad “Grandpa Robot” was gone so he could quit ducking the great Tyson Fury.

If anyone really believes Vitali left boxing due to his “fear” of the Anglo-Irish giant Fury, I have a bridge in Brooklyn for sale, cheap.

A guy with the balls to go up against Putin, the man who was likely behind the poisoning and disfiguring of a previous “pro-Western” Ukrainian leader, is certainly not going to be quivering at the thought of meeting any boxer alive.

Just for some perspective, Fury’s next opponent, by the way, Gonzolo Omar Basile, is a guy who was easily knocked out by Poland’s Artur Szpilka, who himself was TKO’d by American Bryant Jennings last Saturday. There is also talk of Fury meeting Chisora in the summer, if everything goes well.  Chisora was depressed and out of shape last time they met, when Fury boxed well for a win.  But an in-shape, motivated Chisora might prove to be a different animal.

At any rate, many people will probably be hoping to see Tyson Fury put on the mat again, this time for a ten count, by anyone he faces.

And he has nobody to blame for that state of affairs but himself.