After being the victim of what many are calling the worst robbery of 2013, former NABF lightweight champion Raymundo Beltran (28-6-1, 17 KO’s) will get his shot at the vacant WBO NABO lightweight title when he faces off against former WBO world super featherweight champion Roman Martinez (27-2-2, 16 KO’s) in a scheduled 12 round contest on the under card of the rematch between Manny Pacquiao and Timothy Bradley on April 12th. 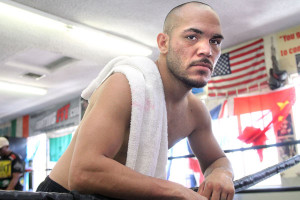 Beltran is coming off a highly disputed draw to Scotland’s Ricky Burns. In September, Beltran travelled to Glasgow to contest for the WBO lightweight title and put on a performance that even had the Scottish fans thinking he’d defeated their hometown champion. Unfortunately for Beltran, a split decision draw was the result, and the Phoenix resident had to leave the U.K. without the strap. Burns, who had suffered a broken jaw in the second round and was dropped in the eighth frame, was originally said to be eyeing a rematch with Beltran, but is now scheduled to fight American Terence Crawford. He’s said to be looking for a rematch with the winner of Beltran-Martinez (he fought Martinez in 2010) assuming he defeats Crawford in their bout scheduled for March 1st.

Martinez is coming off an eighth round knockout loss to Mikey Garcia in November, a bout that saw Garcia dropped in the second frame. The loss cost him the WBO super-featherweight title, the same title he’d lost to Burns in 2010 but regained in 2012 when he beat Miguel Beltran Jr. He’d made two successful defenses before being beaten by Garcia.