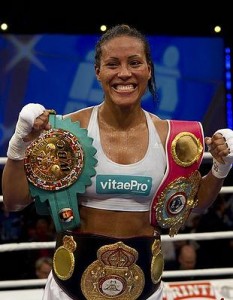 Lamar was a game challenger, but lacked the overall skills to pose any serious threat to the defending champion. Braekhus’s superior speed and accuracy allowed her outland the challenger with little worry, and sweep all 10 rounds of the contest and drop Lamare in the seventh frame. According to the world champ, it was Lamare’s experience that got her through bout. Lamare, who also has experience in MMA, stated after the bout that it was her time to “step down” and wished the champ well.

This is 14th consecutive title bout victory for Braekhus, who has held at least one world title since winning the WBC strap in 2009. She picked up the WBA title later the same year and finally added the WBO belt in 2010. She is widely considered to be the top pound for pound female boxer in the world. A mega-bout between her and American boxer Holly Holm was proposed for 2013, but Holm retired to pursue a career in MMA after a 2013 victory over Mary McGee.

It was an otherwise light weekend for the ladies. In Mexico, former WBC light flyweight champion Esmeralda Moreno (25-7-1, 7 KO’s) lost a close eight round decision to Maribel Ramirez (9-6-2, 3 KO’s). Ramirez was coming in off three consecutive losses, including two shots at the WBC super-flyweight champion, Zulina Munoz. Moreno had been unbeaten in her last 12 contests.