Hola mi familia and welcome to Panama’s 13th most popular source for weekly boxing pontifications, out-of-date television references and sometimes obscure food centric jokes. This week, heavy emphasis will be placed on media misdirection and counter-intuitiveness as we take a quick peek into the innermost cogs and gears that make our dysfunctional sport function. Crack open a cerveza Balboa (if you can find one…trust me, you can’t) and shoot a wild iguana with an armor piercing round, we’re about to start the show! With that being said, I gave you your instructions in the dressing room, what I say you must obey – Cuidate, escucha me, toca los manos y buena suerte…Let’s get it on! 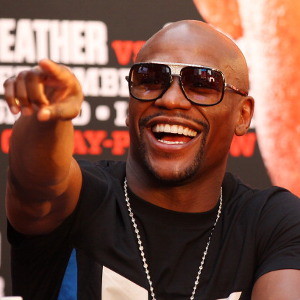 his millions of fans; pick his next opponent. “I’m going to let the fans vote. Tell me who I should fight next. Khan or Maidana?” Tweeted the sport’s brightest star.

There is something familiar about how this is all playing out. A few months ago, talented youngster, Adrien Broner made a similar call to his fans after his decision win over Brooklyn’s Paulie Malignaggi. Unfortunately for Broner, Marcos Maidana was actually in the number one spot to challenge for his shiny new WBA welterweight title, so that was just talk.

Now that there is a smidge of back story to aid in the sale of either fight for Mayweather – the big bad Argentine who beat up on ‘baby bro’ – or the Brit with an absolutely massive following who possibly possesses speed to rival Floyd’s own, an interesting scenario could yet unfold.

While Floyd has always spoke about wanting to fight in the UK, a move like that is extremely unlikely for a man who’s fought exclusively at the epicenter of modern boxing since 2006. The most blacklisted man in all of boxing media, Paul Magno had some interesting points on Mayweather’s previous media misdirection involving then titlist Devon Alexander. The article can (and should) be read HERE. While you’re in the reading spirit, Mr. Gary Russell Jr., who just faced another sandwich artist is the co-star of a very interesting and controversial story that more people should be talking about, check it out.

Regardless of who is ‘chosen’ for Mayweather be it by a legitimate poll or just clever matchmaking, the realist behind this pen and pad is picking Floyd by stoppage, either way.

Something I found interesting on the news and publicist’s website, boxingscene.com, that seemed to slip by was a recent interview with Adrien Broner’s trainer, Mike Stafford. According to Stafford the “lotto” winning punch (in the first round) was the catalyst for Broner’s downfall. I understand standing behind your fighter, but there is a difference between being a team player and being delusional. Another piece of information I gleaned from the (now impossible to locate) article was that Team Broner seems to think that Adrien had to eat up to welterweight. Now, I know we’ve all seen the footage of the between-fights Broner and I will go on record saying that this man has no Problem eating OR gaining weight.

In other fake news, pardoned murderer George Zimmerman is planning an exhibition boxing match to promote something for some reason. Early reports were that massive human being The Game would be his ‘opponent’, however, sickly 43 year-old movie star and part-time crack enthusiast, DMX will now be filling those clown shoes. MAYBE when he was doing those movies with Jet Li could I support this, but now? Maybe clown shoes is being too polite.

I don’t have a problem with a public stunt like this. I don’t even have an issue with the idea being lifted directly (and with zero credit given) from a local Orlando radio show. We are talking boxing, though. Can we at least get an opponent who can pass a pre-fight physical examination? Word is that Zimmerman has been training in some form or another of self-defense, shouldn’t he be in with someone who can at the very least fight back…Oh wait.

Can we just not use the term “celebrity” when referring to him? Or how about just using the adjective ‘infamous’ first?

Thanks for joining us again this week, we’ll be back in our regularly scheduled time slot this coming Sunday to talk about this that and the other. If you haven’t already watched AMC’s The Walking Dead I suggest you do so immediately…and for crissakes,  don’t shoot any lizards (or any animals!). Until next time, santé.