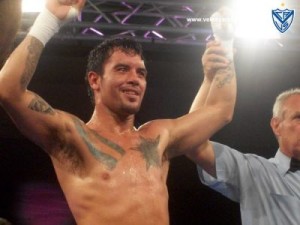 With an honest, earnest losing effort against Keith Thurman last July, Argentina’s Chaves  proved himself to be at least one step up from the typical fringe character boxing-engineered to be resume-filler for the sport’s real stars.

Fattened up with no-hopers in his home country, Chaves was brought in to lose spectacularly to Golden Boy’s upcoming star. However, the 27-year-old Chaves turned in a gutsy, solid effort in his ten-round KO loss to Thurman and just may have earned himself a second look and a real chance at becoming something other than an opponent.

Chaves’ opponent on the 15th, Godoy, is only a slightly warm body.

A fellow Argentine, the 33-year-old Godoy has done relatively well in regional club fights, but has lost each and every time he has tried to step up to the next level. Among Godoy’s highest profile losses are TKO defeats to Wale Omotoso and Serhiy Fedchenko, three decision losses to the light-hitting Cesar Cuenca, and an eight round decision loss to former world champ Andreas Kotelnik.