In the past couple of years, Germany’s WBO cruiserweight champion Marco “Captain” Huck (pronounced “Hook”) has emerged as one of the most exciting fighters on the world stage. 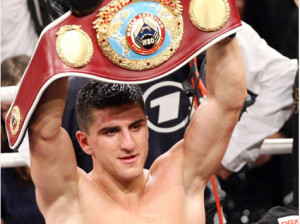 Huck (37-2-1, 26 KOs) has engaged in a brutal trilogy of fights with Britain’s Ola Afolabi, moved up to heavyweight to take on the (at the time) “regular” heavyweight champion Alexander Povetkin–in many people’s minds winning the fight while coming out short on the judges’ scorecards via majority decision–and destroyed tough German challenger Firat Arslan in a thrilling rematch after an initial victory that left Arslan claiming he was robbed.

Huck’s stated desire has been to move up to the heavyweight division and challenge Wladimir Klitschko, but his promoters at Sauerland Event have been holding him back.  Plans right now are for “The Captain” to finally move up in 2015, but until then, he wants to keep setting himself new challenges.

Right now, that goal will present itself in the chance to tie WBO welterweight Johnny Nelson for the most successful cruiserweight title defenses on May 3 in Ludwigsburg, Germany at 13.

“It is giving me a vital kick,” Huck says of the chance to set the record.

“I am still dreaming to step up to heavyweight to be honest. But to achieve this milestone would definitely mean something special to me.”

Johnny Nelson (WBO Champion from 1999 to 2006) is currently the lone WBO record holder.

According to Sauerland Event, Huck’s opponent as he tries to tie Nelson’s record will be announced shortly.