Looking back from where we are today in boxing, with it’s multiple ‘world titles’ infecting every weight division, it is hard to imagine a time when there was just one world champion at each weight, and the contenders actually fought each other regularly, with the prize being a possible shot at the champion. This was the way it was for Bennie Briscoe, back in the 1960’s and 70’s, when he was one of the ‘baddest’ contenders for the World middleweight title, at a time when the 160 pound division was made up of a pretty ‘bad‘ bunch. 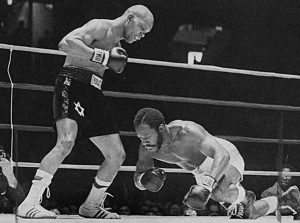 Briscoe came out of Philadelphia, ‘the city of brotherly love,’ which is renowned for producing some of the toughest, most aggressive, and exciting fighters, ever seen within the square ring. Bennie was no exception, in fact, he was and is still seen by many as a prime example of what a Philadelphia fighter should be, tough and aggressive, relentless, with a good punch,  and not afraid to take some, in order to land some, but intent on landing more, far more. Bennie’s nickname was ’Bad’ and long before Mike Tyson, Bennie Briscoe fought every fight with bad intentions.  Bennie was no fancy-dan, but he had good technique, the kind of technique that many of today’s sluggers sadly lack. He had a hard, accurate jab that could shock and shake an opponent.  However, it was his body punches that really wrecked a man.  Briscoe’s body attack was one of the prime reasons why he was so ’Bad’.

Briscoe turned professional in 1962, at the age of 19, after an amateur career, which saw him go 70-3.  Fighting in legendary Philadelphia halls and arenas such as the Blue Horizon, The Convention Centre, and the Philadelphia Arena, Briscoe soon built up a following with his exciting and aggressive style, and it wasn’t long before he was mixing it with some of Philadelphia’s finest and most dangerous; having started his career as a Welterweight. Briscoe soon matured into a middleweight and by the mid-1960’s ’Bad Bennie’ was fighting and beating fellow Philadelphia middleweight warriors, such as Charley Scott, Percy Manning, George Benton, and building a reputation that would become a legend.

In May 1967, Briscoe travelled to Buenos Aires, Argentina, where he faced another young contender, Carlos Monzon. The two men fought an evenly matched contest, which was judged a draw after 10 rounds. For Briscoe, the draw away from home, against such an opponent who was fighting in front of his own people, was as good as a win. Monzon would go on to win the World middleweight championship and become one of the greatest champions the division has ever seen. Indeed, Monzon’s record for the rest of his career, after his first fight with Briscoe, would be 49-0-3.

Briscoe’s assault upon his fellow 160 pound contenders was relentless in the late 1960’s and early 70’s. He was like a rampaging freight train running through the division. There was seldom a soft touch handed to Bennie from his management, but he usually won, and those he lost, such as decisions to Vincent Rondon, Juarez De Lima, and Joe Shaw, were avenged in rematches. A fighter had to be something really special to beat Bennie twice in a row, and the only men to manage this with Briscoe throughout his career, were Luis Rodriguez and Rodrigo Valdes. Briscoe fought Rodriguez twice in the late 1960’s and found the brilliant Cuban (who sadly is seldom talked about today) simply too fast and slippery.

Despite his success, and his regularity in the Ring magazine’s top ten, (when that magazine’s ratings actually counted for something) it took Briscoe 10 years of fighting to get his first world title shot. On November 11, 1972, he went back to Buenos Aires, Argentina, to face Carlos Monzon again, this time with the World middleweight championship at stake, (Monzon took the title from Nino Benvenuti the previous year). Briscoe gave Monzon one of his toughest nights as champion, shaking him up in the 9th round, and always coming forward and trying to pressure the champion. After 15 rounds of intense action, Monzon retained his title on points. It was to be the theme of Briscoe’s career concerning world titles, being so near, yet so far of his goal of becoming a world champion.

Following his unsuccessful world title bid, in 1973, ‘Bad Bennie’ went back to doing what he did best, beating up on the rest of the middleweight contenders. On March 26, 1973, Briscoe stopped Art Hernandez in 3 rounds, to win the NABF middleweight title. After successfully defending his title against Billy Douglas three months later, with an 8th round stoppage, Briscoe lost the title on September 1st, when he was out- pointed by the hugely talented Columbian, Rodrigo Valdes. It was the first of three fights that Briscoe and Valdes would engage in together, each one of them fast-paced duels.

Eight months after their first meeting, Briscoe and Valdes fought again, this time for the WBC world middleweight title at stake. The WBC chose to strip Monzon of recognition as world champion, due to him declining to fight Valdes when they ordered him to fight. This second meeting would be the best fight between Briscoe and Valdes. It was a skilful slugfest, as both men went after each other with everything they had, each man taking turns in hurting the other, as the battle ebbed and flowed at a blistering pace. However, Valdes’ counterpunching and flashy combinations seemed to be edging things, as Briscoe took heavy punishment during his continual march forward.  In the 7th round, Valdes seemed to have tired and Briscoe went after him as he lay on the ropes, only to be caught by a tremendous left hook from Valdes, and then a follow up combination that sent ‘Bad Bennie’ crashing down to the canvas. Although Briscoe beat the count, he was out on his feet, and the referee waved off the action, giving Briscoe the first and only inside the distance defeat of his career.

At this defeat by Valdes, Bennie did what a Philadelphia warrior would be expected to do, shrugged his shoulders, and carried on pushing forward. Over the next three years ‘Bad Bennie’ continued to take on anyone who would face him, which wasn’t always easy and meant that Briscoe often had to take the short end of purses in order to entice opponents to face him. Amongst Briscoe’s victories at this time were wins over Stanley ’Kitten’ Hayward, Eugene Hart, and future World light-heavyweight champion, Eddie Mustafa Muhammad.  Briscoe also fought draws during this time with Vinnie Curto, Willie Warren and Emile Griffith. Through it all, Briscoe stayed at or around the top of the world rankings.  But, despite retaining his status as one of the premier contenders for the world title, Briscoe had to wait until the 1977 retirement of world champion Carlos Monzon (who had regained the WBC portion of the title with two victories over Rodrigo Valdes) before he got another chance of becoming world champion.  On November 5, 1977 ’Bad Bennie’ met Valdes for the 3rd time, in order to decide the winner of the now vacant WBA and WBC world middleweight titles. It was another classic contest between the two, but without quite the fire of their first two bouts. This time Valdes boxed and counterpunched his way to a 15 rounds point’s victory. His movement and slick combinations kept him a slight step ahead of Bennie, and allowing him once more to deny the Philadelphian the world championship. After this third, and final shot, defeat for a world’s championship, something seems to have gone out of Briscoe. This should not be surprising, as Briscoe had been campaigning for over 15 years, most of it in the frontline against the very best. He was now past 34 years of age and perhaps resigned to the fact that he would never reach the pinnacle of his profession…the world championship. In the remaining five years of his career, Briscoe went 8-9.  He was still fighting the best, but the losses were coming more often.  His defeats included losses to future World middleweight champions Vito Antuofermo and Marvin Hagler, two fights in which Briscoe gave, as good as he got at times, but was unable to sustain any advantage long enough to claim victory. Then there were close, and debatable, losses to David Love, Richie Bennett, Clement Tshinza, and Vinnie Curto.

However, even taking into account the level of his competition, and the narrowness of some of his defeats, there was no denying that by 1980 ’Bad Bennie’ had slowed down. While still formidable, he was like a once smooth-running machine, now, sluggish, and prone to misfires.  The familiar march forward had become a slow trudge.

There were still some sparks of brilliance from the fading Briscoe. These included his 1979 point’s win over the young, rugged prospect, Teddy Mann, a 1980 revenge point’s win over Richie Bennett, (after losing to Bennett some months earlier), and on March 23, 1982, an upset 5th round stoppage victory, over another prospect looking to use him as a stepping stone, Norbeto Sabater. The Sabater victory was Bennie’s last.  Three months later, he dropped a close split-decision to Ralph Hollett, in Nova Scotia Canada. Six months later, on December 15, 1982, Bennie fought Jimmy Sykes at the Blue Horizon, Philadelphia. ’Bad Bennie’ started fast, but then seemed to tail off, and be happy just to jab with Sykes. After 10 rounds, Sykes was the winner on points, having been adjudged to have outworked Briscoe. This defeat seemed to convince Briscoe that at almost 40 years of age, and after over 20 years as a professional, his fighting spark was finally gone.  He never fought again.  Briscoe’s final record was (66-24-5, 53kos).

Unfortunately, even after all the years, and all the fights, and his star status as a top contender and favourite performer, Briscoe was not set up for life when he retired. The last years of his career were overshadowed by Briscoe falling out with his long time promoter J. Russell Peltz and manager Arnold Weiss (who was Peltz’s brother in law) after Briscoe declined to renew their contract. Although Briscoe earned an estimated 1.5 million dollars, when he looked at his bank accounts near the end of his career, he had just 30,000 dollars spread over three accounts.

In his retirement, Briscoe worked as a garbage collector and generally kept a low profile.  ’Bad Bennie’ Died in 2010, at the age of 67.

It’s almost a cliché today to pick out certain fighters of the past, and say how if they had been boxing today, then they almost certainly would be world champions.  With Briscoe, however this is no empty cliché, but a stark fact. Briscoe fought at a time where a fighter had to be special just to get himself into contendership. It’s hard to see Briscoe fighting in today’s climate of more ‘world champions’ than genuine contenders, and not picking up a big handful of titles for himself. Although he never won a world title, Briscoe will always be remembered as one of the best middleweights in the world, during a time when the middleweights (and boxing in general) was steaming with talent; when the middleweights were ’bad’ and Briscoe, one of the baddest of them all.

‘Bad Bennie’s’ legend lives on, John DiSanto, who runs the Philadelphia Boxing History website, came up a few years ago with the idea of awarding ’Bennies’ which are small bronze statues of Briscoe, that are awarded to Philadelphia fighters, for fights of the year, and fighter of the year. Over 30 years since his last professional contest, and despite his not being talked about today as much as he should be, Bennie Briscoe remains a legend in Philadelphia.