2012 Olympic gold medalist, Irish lightweight Katie Taylor, is heading to Romania in search of her sixth consecutive championship when she competes in the 2014 European Women’s Elite Championships to be held May 30th through June 8th. The three-time AIBA World Female Boxer of the Year award winner is being aided in her preparation for the competition by fellow Olympic medalists Paddy Barnes and 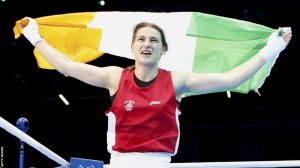 Michael Conlan. Light flyweight Barnes is a two time Bronze medal winner at the 2008 Beijing and 2012 London games while Conlan, a 1-0 professional bantamweight, also took bronze in London as a flyweight.

The 27 year old Taylor took up boxing in 1998 at the age of 12, coached by her father Peter, also a successful amateur pugilist. In 2005 she won her first gold medal at the European Amateur Championships in Norway, her first of five gold medals in that tournament alone. She also holds five gold medals in the European Union Championships, and four in the World amateur championships. Including the London Olympics and the Russian Multi-Nations event in 2009, she totals 16 first place finishes at the world level.

2014 marks Taylor’s eighth successive year as the number one ranked amateur lightweight in the world. In addition to boxing, she is also an accomplished football player, having played for the Ireland women’s senior football team and her local GAA club Fergal Óg of Bray.