24-year-old welterweight/junior welterweight prospect, Thomas Dulorme (20-1, 14 KOs) has cleaned house and is hoping recent staff changes will help him get to that next level. 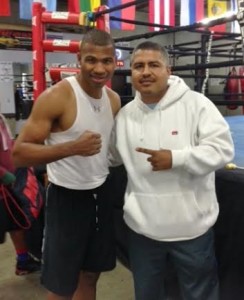 The Puerto Rican prospect, who was co-promoted by Lou DiBella, Gary Shaw and Javier Bustillo, recently bought out two-thirds of his promotional unit and is now working solely with Shaw.

The young fighter, ranked in the top ten at 140 lbs. by the WBA, WBC, and IBF, has also made a major change to his gym work, taking his training to Oxnard, California to work with Robert Garcia.

According to Dulorme, former head trainer Jose Bonilla will remain part of his team, but he felt he needed an experienced world class trainer like Garcia to make it to the next level of development.

“Garcia has a extensive world class experience. I’ll be grabbing like a sponge all of his knowledge, and let me not forget about the great quality sparring partners that are here,” Dulorme said. “I needed to see a change in my workouts, learn new things, but I want to make clear that my former trainer Jose Bonilla, will always be a part of my team because I am very grateful for what he has done for me in my career, as a trainer and currently as a manager”

Dulorme also stated that he may add Alex Ariza as strength and conditioning coach.

The well-regarded prospect has beaten veteran names such as DeMarcus Corley and Francisco Figueroa in a five-year pro career, but came up short, losing via TKO 7 to Luis Carlos Abregu in a 2012 bid for the vacant WBC international welterweight title.