While the eyes of the sporting world are currently glued to the winter games in Sochi; two Russian boxers prepare to square off in the 2014 Boxcino Tournament. On February 21, live on ESPN, lightweight Fedor Papazov (14-0, 9 KOs) takes on Petr Petrov (32-4-2, 15 KOs) in the opening round of the single-elimination tourn 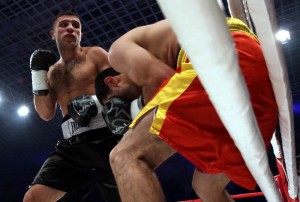 The fight is a major step-up in competition for Papazov, whose pro career does not yet compare to his extensive amateur one. From 2005 to 2008, Papazov competed in competitions like the European Olympic Qualifiers, World Championships and Russian Nationals. And he’ll need every bit of that experience against an opponent who’s had 24 more pro fights than he has; including one against welterweight champion Marcos Maidana.

“I have a lot of amateur experience, so I’m not too worried about my opponent. We are both Russian so I know it will be a great fight,” said Papazov.

In an era where promoters bring their prospects along slowly; placing one in a bracket filled with hungry counterparts is risky. Still, the 28-year-old is grateful for the opportunity to showcase his skills on national television.

“My Manager Vadim Kornilov proposed the idea to me and I loved it. I think it’s a great tournament that is the fast track to test yourself and prove yourself,” Papazov said.

Papazov is the stable mate of one of the hottest fighters in the world today, 140-pound champion Ruslan Provodnikov. But before the “Siberian Rocky” could star on HBO, he had to make his name on ESPN’s “Friday Night Fights”. Papazov wants to take a similar road to success.

“Ruslan and I are friends, and I know that I have to follow the same career path, which is through ESPN, to get to where I want to go,” said Papazov.”

The self-proclaimed brawler hopes to make the most of his new found exposure and put on a show for the American audience; but more importantly, he’d like to take home the Boxcino title.

“I know everyone will see me, because ESPN is one of the biggest networks out there,” said Papazov. “But winning would be everything I ever dreams of.”