Let’s face it, without the UK heavyweights over the last couple of years, there often wouldn’t have been much for fans of heavyweight boxing to talk about.

With WBC heavyweight champion Vitali Klitschko mostly out of action both due to injury and his new career in politics, and brother Wlad, who owns the rest of the 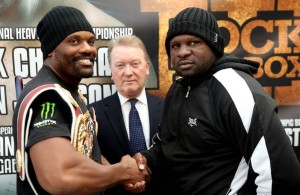 major belts, not producing the fireworks he did back in the days of challengers like Calvin Brock, the division has been dependent on those crazy Brits to keep things interesting.  Kubrat Pulev seems a fun guy and has a sexy pop star girlfriend, but he doesn’t speak English, so we in North America have depended on our cousins the Brits to keep us entertained.

Whether it was Anglo-Irish giant Tyson Fury running off at the mouth on social media and getting flattened in the ring (only to get up and win); fellow Brits Dereck “Del Boy” Chisora and David Haye getting in to a “feud” (how stage-managed that one was being an open question) that was ultimately settled by Haye knocking Chisora cold while wearing running shoes in a rainy London soccer stadium; or even formerly rising Liverpudlian giant David Price being upset not once, but twice, by American veteran Tony Thompson in his own back yard, the UK heavies have kept the division lively.

This coming weekend, the Copper Box in London sees two of the aforementioned parties in action, as Chisora (19-4, 13 KOs) takes on American veteran Kevin “Kingpin” Johnson and Fury (21-0, 15 KOs)–after two cancellations of a UK mega-bout with David Haye due to injuries incurred at the last moment by the latter boxer–taking on American journeyman Joey Abell, himself a late replacement for tattooed Argentinian Gonzalo Omar Basile.

The first of Haye’s two cancellations on Fury was occasioned by a cut around the eye incurred in sparring; Fury himself was cut in the same area during sparring with new American stablemate Eddie Chambers this week, but says he refuses to “do a Haye” and will fight on against Abell.

Speaking of Haye, it’s a bit odd that he has picked this week, the very week of Fury’s replacement fight, to decide to repeatedly reveal his plans to possibly fight again to various British media types.  The odds on those plans, by the way, seem to be rising by the day, 50% at last count, from a beginning Haye estimate of 5%.  Could the Hayemaker, known for his love of mental game-playing, be trying to get into Fury’s head ahead of his clash with Abell?

Fury has already spoken of feeling as if he “lost the lottery” when Haye cancelled their UK mega-fight for good with a supposed bad shoulder, so no doubt reminders that Haye is still considering a boxing comeback only brings negative thoughts along with it for the Anglo-Irish giant.  And Fury’s recent comments about his fears should powerful journeyman Abell come through indicate that Haye’s media machinations are working to some extent.

As for Haye, I’d say the odds on seeing him back in the ring are much higher than 50%.  He never did that well against giants like Fury anyway (see his mixed-result fights with Nik Valuev and Wladimir Klitschko for evidence).  So it won’t bother him much to miss out on this latest big man, as he doesn’t need the money, his bank account still bulging with moolah from his bouts with Wladimir Klitschko and Chisora.

Chisora, known for eccentric behavior, such as slapping WBC champion Vitali Klitschko at their weigh-in, trying to kiss Robert Helenius during theirs, brawling with Haye at post-fight press conference, and so on, has been on his best behavior leading up to this fight with Kevin Johnson, whose last notable win came over world champion Wladimir Klitschko’s next opponent, Aussie truck driver Alex Leapai.

Johnson did show up not long ago in Ireland to fight Fury, but the bout itself seemed a glorified sparring session, Fury keeping Johnson at bay rather easily with his long jab.  Chisora, meanwhile, recently inflicted the first loss on the career of American Malik Scott, though the latter claimed he was the victim of the now infamous UK “quick count” and says he could have continued.

Nevertheless, Chisora did inflict some punishment on the elusive, negative-fighting Scott, and looks to be on the comeback trail with four consecutive wins after tough losses to Haye (where he did rattle his opponent before being stopped), Vitali Klitschko (where he kept coming forward but was nevertheless dominated by a one-armed champion, as Klitschko injured his left shoulder early in the fight and fought mostly with the right hand), and Helenius, where just about everyone thinks “Del Boy” was robbed in an encounter that left Helenius’s shoulder badly injured, with his career still in jeopardy today–having fought mostly unimpressively (though winning) twice since his rugged battle with the Brit–post-rehabilitation.

Chisora and others have questioned Johnson’s motivation, and implied he’s now just another fighter–after lopsided losses to former WBC champ Vitali Klitschko and to Fury–who is just out for a payday, without the desire for a real test of his abilities.  If Johnson, who fancies himself an Ali-like talker, is ever going to get anywhere, he needs to start with some solid action to back up his words in this fight, or he may become a distant memory in the heavyweight division very soon.

Chisora will be out to make sure that a Johnson upset doesn’t happen, and then look toward a summer matchup with Fury, should he conquer the journeyman Abell.