Less than a month after his father passed away, 44-year-old Mauricio Sulaiman has received unanimous support from the WBC Board of Governors to become the new WBC president. 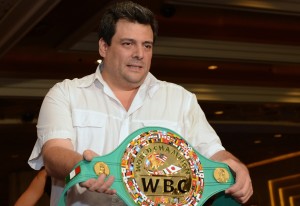 Despite an earlier claim from Sulaiman that he wasn’t interested in the position, there really were no other candidates for the job and no doubt that it would be him taking the leadership role in the sport’s second oldest sanctioning body. Already the organization’s executive secretary for a number of years, Mauricio was raised within the confines of the WBC and groomed by “Don” Jose to be his heir to the throne.

“Mauricio is the person who has more aptitudes than all of us.” said WBC governor, Rex Walker. “He’s the only one who knows everything about the WBC. He lives in Mexico and learned a lot from his father. It doesn’t matter that he is son of Don Jose, we chose him because of his ideas and heart.”