Popular Russian light heavyweight Sergey “Krusher” Kovalev (23-0-1, 21 KOs) is set to defend his WBO title against unknown Cedric Agnew (26-0, 13 KOs) on March 29 at the Boardwalk Hall in Atlantic City, New Jersey. And as Kovalev is a hot commodity at HBO, this stay-busy fight will be shown live in HBO. 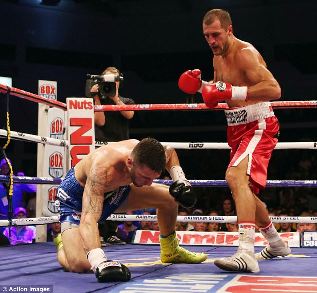 Kovalev had a breakout year in 2013, winning all four of his fights by knockouts and becoming one of the most sought-after attractions 160 pounds and above. Kovalev’s four wins included stoppages over former titlist Gabriel Campillo, then-WBO light heavyweight titlist Nathan Cleverly, and prospect Ismayl Sillakh. While the public has clamored for a title unification between Adonis Stevenson and Kovalev, that fight does not appear to be made until this fall, at the earliest.

Agnew has never fought at the championship level, but he’s managed to work himself into the number 15 spot in the WBO light heavyweight rankings in November. His last fight, a 12-round unanimous decision win over faded former title challenger Yusak Mack in April 2013, came seven months prior to his appearance in the WBO’s rankings.