Perhaps the paranoia Tyson Fury  (21-0, 15 KO’s) has been voicing the last few days about his Saturday meeting with hard-hitting American veteran Joey Abell (29-7, 28 KO’s) is based in reality after all. 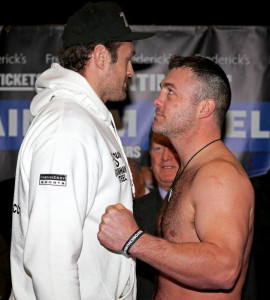 The scales seldom lie, and Fury has weighed in at a career high of 274 pounds for his fight with the fit-looking Abell, who came in at 241.  Notably, Fury didn’t disrobe at the weigh-in.

Fury has also had a week filled with distractions, as he has revealed that his wife has spent a couple of days in the hospital, two of his cars have been vandalized by arson back home, and to top it all off, David Haye has spent the week telling UK reporters how eager he is to make a comeback, after cancelling twice on a mega-fight with Fury.

Fury will now meet up with the rugged Abell, who scored a somewhat controversial knockdown over top heavyweight Kubrat Pulev of Bulgaria recently, but didn’t last long after that.  Pulev mocked the knockdown by standing on one foot, and felt he was pushed along with Abell’s scoring blow.  He then quickly finished off Abell in four rounds with punishing body shots.

Nevertheless, Fury is not in the tip-top condition Pulev showed up in against Abell, whose record shows he can bang.  And when Fury has shown up out of shape in the past, such as he did against a ripped Canadian heavyweight champion in Neven Pajkic, bad things have happened: Pajkic flattened Fury once and hurt him badly again before some rabbit punches and a dubious stoppage by the referee saved the Brit.

One interested party Saturday will be headlining Brit  Dereck “Del Boy” Chisora, hoping for a big summer rematch with Fury, who he lost to while in a similarly poor physical condition back in 2011.  Chisora takes on American veteran Kevin “Kingpin” Johnson in the card’s headline event at London’s Copper Box Arena.

Chisora weighed in for the headlining bout at 238 pounds, while Kingpin Johnson tipped the scales at 240.