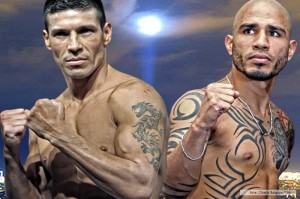 corner assignments, both camps have come to terms in what should certainly be one of the biggest events of the year.

Cotto will attempt to become the first Puerto Rican to win world titles in four different weight classes. This will be his second assignment under the guidance of hall of fame trainer Freddie Roach. In their October debut Cotto scored a third round stoppage of Delvin Rodriguez. The “Boricua Bomber” has lost his two previous bouts against top five pound for pound opponents; dropping a unanimous decision to Floyd Mayweather in 2012 and being stopped by Manny Pacquiao in round twelve of their 2009 clash. This will be Cotto’s first fight at the 160-pound limit.

Martinez has only fought once since his impressive victory over Julio Cesar Chavez Jr., 17 months ago. Last April, he was knocked down by Martin Murray in route to narrow unanimous decision win in his Argentinian homecoming. Martinez injured both his knee and hand during the bout, and has been out ever since. The 38-year-old will be making his seventh defense of his WBC strap. He holds victories over Kelly Pavlik and Paul Williams.

The fight will be promoted by Top Rank, in association with Dibella Entertainment and broadcasted by HBO Pay-Per-View.