Miguel Vazquez (34-3, 13 KOs) made the sixth defense of his IBF lightweight title Saturday by scoring a unanimous decision over Russia’s Denis Shafikov (33-1-1, 18 KOs) in Macau, China. 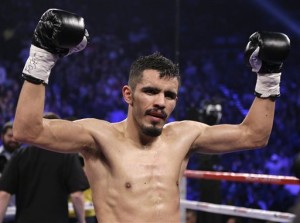 Vazquez moved and boxed effectively, as expected, but also seemed intent upon winging wide uppercuts to try and catch the forward-leaning and ever-pursuing Shafikov. The uppercuts delivered limited results, but provided for an even more awkward pairing of styles that led to several clashed of heads.

The southpaw Shafikov kept pushing forward throughout the fight, but was unable to cut off the ring. The IBF’s no. 3 contender at 135 lbs. was also unable to get within real punching distance of the long, lanky Mexican for enough time to launch any sort of sustained offensive surge.

With both fighters being nicked up from headbutts, there looked to be more war than was actually the case. The reality was that Vazquez had little trouble with a tough, but incomplete challenger.