When the middleweights take the ring for the 2014 Boxcino tournament Friday night, Willie Monroe Jr. (15-1, 6 KOs) will finally get the chance to silence those who left his side after his 2011 loss to Darnell Boone. An impressive win over veteran Donatas Bondorovas (18-4-1, 6 KOs) on ESPN would go a long way towards proving that he’s 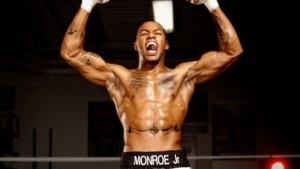 The Rochester, New York native was originally looking to campaign at junior middleweight, but when Artie Pelullo of Banner promotions offered him a spot in Boxcino; he couldn’t turn it down.

Monroe Jr. began his career 10-0 and with a combination of good looks, charisma and talent; he was well on his way to super-stardom. But after the loss to Boone, he was dropped by Dibella Entertainment, his management and trainers.

The experience exposed a side of the sport that he had always heard about.

“It showed me the other side of boxing,” said Monroe Jr. “The dirty side that I was always warned about. When you win, you win with everybody and when you lose, you lose alone. I was left by myself; everybody walked away from me.”

After the fall out with his team, Monroe Jr. returned home and began working for Harris Communications, where he helped build radios for the military. He also took at part-time job at Footlocker.

“It was kind of embarrassing to work at Footlocker and have people walk in like ‘wait a minute, that’s Willie Monroe, what are you doing working here,’” said the 27-year-old.

Throughout it all, he stayed hopeful and continued to train.

“I could’ve done like a lot of other fighters and quit boxing, but instead I stayed in the gym,” Monroe Jr. said. “I had a lot of sleepless nights and long days; times I felt like it wasn’t worth it and I wasn’t good enough. But I stayed prayerful and close to my family.”

Things turned around in 2012. After his son was born, he returned to the ring and earned a victory over Mark Anderson. He was also picked to be the exclusive sparring partner for former world champion Miguel Cotto; while he prepared for his fight with Austin Trout. The experience was a confidence booster for Monroe Jr.

“I learned a lot sparring with him, it showed me where I am as a professional,” said Monroe Jr. “I was his only sparring partner and there were days where we were doing 10 to 12 rounds. I felt like I held my own with Miguel Cotto for 12 rounds.”

Monroe Jr. is the product of a rich boxing lineage that includes his grandfather Lee Monroe, his father Willie Monroe and his great uncle Willie
“The Worm” Monroe, who once beat Marvin Hagler. The middleweight contender doesn’t see his family’s success adding any additional pressure on him going into Boxcino.

“No, it doesn’t add any pressure. I’m an individual just like my father and great uncle were,” said Monroe Jr. “It’s [boxing] a part of my tradition, so it actually brings me joy to fight, because I’m in my element.”

Growing up, music was also an intricate part of Monroe Jr.’s life. He began singing in church and used it as an escape from the daily grind of training under his grandfather’s tutelage. He went on to attend a performing arts school and formed an R&B group with his brother Trent, called “Signature”. Along with two other members, the ensemble opened for acts like Trey Songs, Genuine, T-Pain, Mario and Tank.

“Music was our outlet away from boxing,” said Monroe Jr. “My grandfather was like Joe Jackson when it came to training fighters, so music was my escape.”

In the midst of his rough 2011, “Signature” broke up. Monroe Jr. cites jealousy as the reason for the split and doesn’t believe that his commitment to music played a role in his loss to Boone.

“No, god doesn’t give you more than you can handle and if it did take a toll then he removed it. But it’s nothing I regret, I love my music,” Monroe Jr. said.

Last year, Monroe Jr. won four fights, but lost two irreplaceable loved ones. His longtime friend and adviser Johnny Bos died in May, and his grandfather passed away in September. As a way to honor the man who raised him, he will wear the family patriarch’s name on his ring attire during the tournament.

“That’s just my little trinket to say that I have my grandfather in the ring with me,” said Monroe Jr. “I give all credit to god and my grandfather, and I miss him dearly. I dream about him all the time and I’m going to dedicate this tournament to him and Johnny.”

Two years ago, Monroe Jr.’s life was like something out of a Hollywood movie script. Born into greatness, an undefeated rising pro, with a successful music career. It wasn’t until his fall from grace and subsequent comeback that he became someone we can all relate to in some way.

“It makes for a good story. If I retired as someone who went to the Olympics, won gold medals, went undefeated and became a millionaire, that’s not really a story that many care to hear,” said Monroe Jr. “But you tell them about your trials and tribulations, and people learn from those stories. Those are the stories that motivate people to be great.”