Technical knockouts were the norm at the opening round of the 2014 Boxcino middleweight tournament. Young fighters were exposed, while older combatants were showed the door. And when the dust settled, we were left with what should be an evenly matched and equally entertaining Semi-finals. 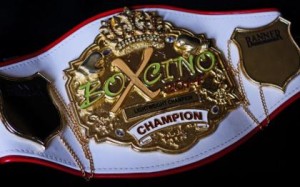 The fight began slowly, with both fighters trying to feel each other out in round one. In the second, Eduard stayed in the center of the ring and when Adams came within range, he landed light combinations that were mostly blocked. A minute into the round, Adams began to press the action and land big body shots as he backed Eduard into the corner. After an uneventful third, the fourth began with Eduard peppering Adams with his jab, until he was countered with a left hook that sent him to the canvas. The Haitian veteran survived the round, but quit on his stool before the fifth, ending the fight and quite possibly his career.

At the sound of the bell, Agbeko jumped on Gatica, but was countered effectively. For as long as the bout lasted it was Agbeko’s wide punches against Gatica’s straighter shots. But both fighters did share similarly sloppy footwork, which commentator Teddy Atlas pointed out throughout. The beginning of the end came in round three, when Gatica began to find a target for his leaping one two’s and had Agbeko out on his feet when the bell sounded to end the frame. He jumped on the Ghanaian at the start of round four and finally got the stoppage after landing numerous unanswered power shots.

The taller Kopylenko stalked Fort and had the American hurt for the bulk of the round one. Kopylenko’s style mirrored what we’ve seen from Eastern European fighters of late. He was methodical and didn’t waste a movement or a punch. He knocked Fort down with a jab at the start of the second and stopped him soon after.

This was the tough luck draw of the competition so far and ended up being the most intriguing fight of the night. For six rounds, Bondorovas played the bull to Willie Monroe Jr.’s matador. After the Lithuanian appeared to have won the first with his pressure, Monroe Jr. used his jab and defense to control the second. In the third, Bondorovas pressed and landed enough to make Monroe Jr. seem uncomfortable in spots. Both boxers had their moments in rounds four and five, and the fight seemed up for grabs going into the sixth, with Teddy Atlas having Bondorovas up and the facebook fan poll scoring it for Monroe Jr. A competitive sixth was highlighted by Bondorovas removing his own tooth from his mouth and tossing it towards his corner. The three judges scored the fight 58-56, 59-55 and 59-55 all for Monroe Jr.