Leo Santa Cruz (26-0-1, 15 KO’s) vs. Cristian Mijares (49-7-2, 24 KO’s)
Santa Cruz is getting better each time we see him. The reigning WBC super bantamweight champion makes the second defense of his world title against former 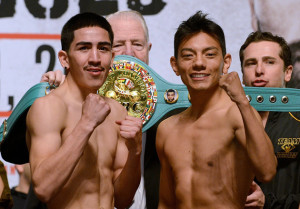 multi-division title holder Mijares in tonight’s main supporting bout. Santa Cruz won the WBC strap last August, stopping Victor Terrazas in three rounds, he has since made one defense; in December he scored a 12 round decision over Cesar Ceda. Before making the jump to the superbantamweight class, he held the IBF bantamweight title and made three successful defenses. Mijares had a shot at this same title almost a year ago, but lost a close split decision to he aforementioned Terrazas. Since the loss, he’s won two bouts, both by stoppage. A veteran with over 16 years professonal experience, Mijares has held multiple world titles as a super flyweight; the IBF, WBC, and WBA “Super” world titles were all his. Prior to the bout aganst Terrazas, he had won 11 straight.

Jorge Linares (35-3, 23 KO’s) vs. Nihito Arakawa (24-3-1, 16 KO’s)
Linares is coming off an impressive first round knockout of Francisco Contreras last Novmber. The former WBA super featherweight champion came within a hair of winning the lightweight title from Antonio DeMarco in 2011 and was comfortably ahead on the scorecards when he was stopped in the 11th frame. He followed the defeat with another tough loss, being knocked out in two rounds by Sergio Thompson in a lightweight eliminator. He’s won four bouts since, the last three by stoppage. In Arakawa he faces a former Japanese and OPBF lightweght title holder, but the Tokyo native has lost two of his last three outings and was dropped twice in his last contest by Omar Figueroa en route to a 12 round loss for the interim WBC lightweight strap.

Sergio Thompson (28-3, 26 KO’s) vs. Ricardo Alvarez (23-2-3, 14 KO’s)
With the vacant WBC International lightweight title up for grabs, both fighters are looking at this bout as a path to bigger things. Alvarez is coming down in weight for this one, and coming in a five fight winning streak that includes winning the WBC Continental Americas and WBC Latino light welterweight titles, the former being defended three times. In a world title opportunity last August, Thompson lost a 12 round contest for the WBC super featherweight title to Takashi Miura in a bout that saw him dropped twice. He’s former regional champion, holdng the WBC Internatonal Silver super featherweight title whch he successfully defended twice. He holds a second round TKO stoppage over Jorge Linares.