On Saturday, March 15, Danny Garcia (27-0, 16kos) enters the ring for the first time in 2014, to defend his WBA and WBC World Light-welterweight titles against rugged veteran Mauricio Herrera (20-3, 7kos) at the Coliseo Ruben Rodriguez in Bayamon, Puerto Rico. 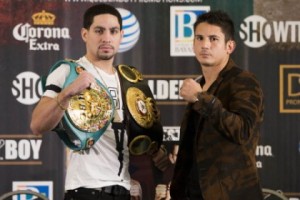 This will be Garcia’s sixth world title fight in a row, going back to his March 24, 2012, clash with Mexican legend Erik Morales, which saw Garcia win the WBC world light-welterweight title belt with a spirited points verdict over Morales. Since then, Garcia has beaten Amir Khan, Erik Morales again (this time via a destructive 4th round knockout), Zab Judah, and Lucas Martin Matthysse; in a run of victories that has established him as one of the best of boxing’s current champions. Garcia has marked himself out as one of the few world champions around today who can lay claim to being the number one in his weight class, in what is one of the most competitive and talent-laden divisions in boxing at the moment.

Despite his impressive run of form over the past two years, Garcia has not had an easy time gaining respect for his talent or achievements. In many ways, the Philadelphia native has had to do things the hard way, while other fighters gain plaudits for fighting at catch weight, or beating fringe contenders. Garcia has faced five former world champions in his past seven fights. Yet, much of the respect Garcia received after these fights was grudging, and in many ways he continued to operate under the radar, entering each of his previous world title fights the underdog.

Ironically, it was Garcia’s victory over a fighter, who has not held a world title belt, that has seen him finally receive some genuinely overdue recognition. When Garcia fought the big punching Lucas Matthysse last September, the general consensus amongst both fans and media was that Garcia was really going in over his head this time, and that the Argentine’s punching power would make short work of him. There were even comments concerning Garcia’s heart and willingness to fight Matthysse.  Garcia’s subsequent victory over Matthysse, with a clinical and gutsy display of box fighting, silenced the critics, and proved to be Garcia’s breakout victory.

People are now finally coming to see Garcia as one of the elite champions and perhaps even, the next ’big thing’. While Adrien Broner has been making a big noise outside the ring, but disappointing inside it, Danny Garcia has been doing just the opposite.

Garcia’s father and trainer, Angel Garcia, is now also getting some credit for guiding his son’s career. Angel has gained a reputation as a rather cantankerous and controversial figure, in contrast to his much quieter son, but his partnership with Danny, is so far turning out to be one of the more successful and happier father/son partnerships seen in boxing in recent years.

Saturday’s fight will be a form of homecoming for Garcia, as he fights for the first time in his parent’s native Puerto Rico. Even though he grew up in Philadelphia, Garcia has always spoken of his pride regarding his Puerto Rican heritage, and his desire to be Puerto Rico’s next great boxing champion. This fight offers a different kind of challenge to Garcia, in comparison to his recent bouts. For the first time since he first won the WBC title, Garcia goes into this fight the favourite, rather than the underdog. Herrera is a rugged performer who has become a favourite amongst many fans due to the number of exciting contests he has been involved in over the past few years. Herrera is not a big puncher, but has a good jab, footwork, and likes to throw punches in combinations. Herrera has a willingness to engage in wars, despite his boxing ability, and has done so in recent fights with the likes of Ruslan Provodnikov, Mike Dallas Jr, Mike Alvarado, Karim Mayfield, and Ji-Hoon Kim.

Herrera’s standout result is his point’s victory over current WBO light-welterweight champion Ruslan Provodnikov. However, the Provodnikov victory was back in 2011 and has been followed by hard-fought points defeats to Alvarado and Mayfield. At the age of 33 years old, with seven years of often hard fighting behind him, the feeling is that this big chance has come a little too late in the day for Herrera.

The challenger does come into this match with a two-fight winning streak from 2013, but trial horse Miguel Angel Huerta, and rugged, but limited, Ji-Hoon Kim, are both a number of levels below Danny Garcia.

If Herrera has a chance, it is to be found in his jab, as Garcia has been troubled in previous fights by the jabs and speed of Judah and Khan. Despite his lack of power, Herrera has good speed and a good jab, and if he can get his jab going and use the ring, then he could cause Garcia some early problems. Garcia is usually a slow starter, who studies his opponents and adapts to what they are doing. His ability, to either slug it out or box, has been well-illustrated in recent contests. Garcia is likely to go for Herrera’s body early on and look to wear down the older man. Herrera has never been stopped, but at 33, with Garcia approaching his prime and looking for a showcase performance in front of the Puerto Rican fans, the chances of a late stoppage victory is possible.

Herrera is a tough and seasoned campaigner, but with all the physical advantages and better all-round boxing ability, the biggest danger for Garcia in this fight could be if he starts to regard it as a showcase fight, rather than a genuine challenge. The underdog is always a dangerous animal, especially when he is well seasoned, with a good chin. This is Herrera’s big chance to burst into the big time; he has everything to gain, and nothing to lose in this fight.

It seems unlikely that either Danny or his father Angel will take their eyes off the ball at this point, having worked so hard to get to where they are now. Garcia will be looking to win this fight in some style, and then move on to bigger matches later this year.  Perhaps even a match with the man everyone wants to fight, Floyd Mayweather.

This looks like being an interesting fight early, with Herrera using his jab and movement and offering the champion an awkward target. Garcia will get his own jab working and look to land to the body. As the fight goes into the later rounds, Garcia will start walking through his lighter hitting opponent, and take control of the match. The heavier artillery of Garcia will gradually prove too much for Herrera and Garcia is likely to force a stoppage somewhere in the last three or four rounds.