It’s not even fun anymore for the rest of us, watching American boxing fans squirm, make excuses for and even downright give up on what used to be called the sport’s “glamor division.” 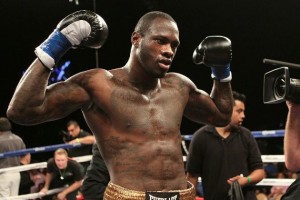 While many American boxing fans (and/or fans of American boxers) blame the Klitschko brothers for taking away what used to belong almost exclusively to them, the problem actually goes further back, to a Jamaican/Canadian/British boxer named Lennox Lewis, who blew away most of his American competition, righting the ship after losses to Oliver McCall and Hasim Rahman with easy rematch wins, then topping it off by pummeling a fading Mike Tyson.

It was Lennox who started the trend of giant heavyweights from non-US countries owning the heavyweight division, and after he barely survived a contentious scrap with a close to prime Vitali Klitschko, it became the Ukrainian brothers’ turn to take over the division as Lewis decided he’d had enough and Vitali and “little” brother Wladimir took over.

Many now forget, as perhaps they will when the Klitschkos’ reigns have been over for awhile, that Lennox Lewis was not very popular with, and was even loathed by many American boxing critics and fans.  He was often called a “boring jab artist,” a derogatory label that has also been applied to the Klitschkos, though in truth it is current champion Wladimir, using the jabbing, one-two style taught to Lewis by the late Kronk Gym trainer Emanuel Steward, who utilized that style far more than his gunslinger older brother with the iron chin.

Under Steward’s tutelege, Lewis and Wladimir used their lethal left jabs to weaken and mesmerize opponents, softening them up for hard right hands they often never saw coming.  Even Vitali, in the second “comeback” phase of his career, would pick up some useful tips from Steward and become a better defensive fighter, though he was never someone who overly relied on the jab.

At any rate, the loathing of American boxing “experts” like the late Bert Sugar for the Klitschkos was so intense that suddenly many who had hated Lennox Lewis began to listen and transfer their hatred to the new heavyweight usurpers from Ukraine.

So yes, it’s a been a long wait for fans of American boxing for a new savior: three candidates have emerged in recent times, with one pretty much out of the running already.

Yes, nice guy he may be, but Seth Mitchell has proven beyond much of a doubt that he is a football player trying to box.  His last blowout first round, knockout loss to veteran Cristobal Arreola, a Mexican-American, put the latter man’s star back on the rise (he’s now preparing to take on Haitian-Canadian Bermane Stiverne for the retired Vitali Klitschko’s WBC world title belt), with Mitchell for now on the sidelines, out of the picture.

Philadelphian Bryant Jennings also stepped up recently with a impressive win over an out-of-sorts Artur Szpilka of Poland, who had been forced to spend most of fight week flying around the world due to visa problems.  But at only six-foot-two, one has to wonder at Bryant’s chances when he steps up against the Lewis/Klitschko sized heavyweights in the division.  Even top Bulgarian contender Kubrat Pulev is 6′ 5″ tall, while Brits Tyson Fury (6′ 9″) and David Price (6′ 8″) are also postmodern heavyweight giants.

Which brings us to this weekend’s most interesting prospect: Deontay “The Brown Bomber” Wilder (30-0, 30 KOs).

At 6′ 7″ tall, Wilder is the guy who fits into the mold, physically at least, of the post-American heavyweight champion.  He has the size to compete with the top contenders and the champion himself, and packs a powerful right hand that has resulted in a perfect KO record.

Now, no-one is saying that size alone is the key to heavyweight success: if it was, guys like Julius Long and Michael Grant surely would have been wearing some of those world championship straps.

But size and strength plus skill is surely the key to lasting heavyweight success in the Lewis-Klitschko era.

The problem fans have with Wilder is that we don’t know if he’s a Julius Long (who stands at 7′ 1″) or a future Lewis or Klitschko.   And so far, the level of his opposition has been geared to avoid that issue.  Yes, you’ve likely heard the jokes: cabbies, caddies, truck drivers and bartenders run for their lives when they see Wilder coming.  And indeed, one of his recent victims really was a caddie.

This weekend in Puerto Rico, we can give Wilder, 28–whose thick and muscular upper body and stick thin legs give him a top-heavy look–credit for taking at least a minor step up in competition against 6′ 4″ fellow American Malik Scott (36-1-1, 13 KOs), who until recently himself was undefeated, having also taken on many of the cabbies and caddies mentioned earlier.

To his credit, Scott has of late decided to try to step up, and in his first attempt, drew with rising Ukrainian Vyacheslav “The Czar” Glazkov (who incidentally takes on Polish veteran Tomas Adamek this weekend).  Scott’s extremely negative approach in the ring cost him against Glazkov, when veteran judge Julie Lederman refused to reward his counter-punching style and scored the fight as even, though many US fans thought Scott won the fight.

Scott then tried to step it up again versus comebacking Londoner Dereck “Del Boy” Chisora at Wembley Arena, and while he avoided the kisses and slaps that other Chisora opponents have received, he also got rewarded with a loss in what seemed to this writer as another of the “quick stoppages” that have of late typified major British fights (see also: Carl Froch versus George Groves).

Scott got back on track with a quick TKO win over Grover Young, and now stands between Deontay Wilder and the next stage of the latter man’s career.  While Scott might not be a Lewis or a Klitschko, neither is he a cabby or caddy.  The man can box, has a good jab, and is not lacking in size.  His movement is also superior to most of the men Wilder has faced: including the former basketball player Kelvin Price, who literally stood and watched as Wilder ran across the ring and put a knockout blow on him.

Make no mistake: after the fall of Seth Mitchell, it is Wilder who the boxing powers that be in the United States are looking to as the new American savior (sorry Chris Arreola).  And who can argue with 30 knockouts out of 30 tries?

However, there are still those worrisome little items, like career journeyman Harold Sconiers putting Wilder on the mat before getting knocked out himself.

Scott is good enough to help the boxing world answer some, if not all, of those troubling questions about Deontay Wilder.