Four-division world champ, Juan Manuel Marquez (55-7-1, 40 KOs) has come to terms to face former junior welterweight titlist, Mike Alvarado (34-2, 23 KOs) May 17 at a mutually agreed upon weight of 143 lbs. with the winner tentatively scheduled to take on the winner of the April 12 Manny Pacquiao-Timothy Bradley bout. The 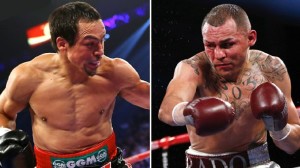 welterweight contest is to be held at the refurbished Forum in Inglewood, California, the home of many Marquez fights during his formative years as a fighter from 1995 to 1999.

Despite having balked at the idea of a fifth bout with Pacquiao after his knockout of the Filipino star in their last meeting in December of 2012, Marquez’s willingness to take on Alvarado in an eliminator-type set-up possibly suggests that the Mexican future Hall of Famer may be ready to entertain the idea of one more bout with Pacquiao.

Marquez has long stated that it’s his goal to be the first Mexican five-division world champ, but with Golden Boy in control of three of the four recognized welterweight titles, it appeared to be either face the winner of the Pacquiao-Bradley WBO welterweight title bout or give up on the idea. The 40-year-old Marquez may now be ready to swallow his pride for one more big money bout and a shot at making history.

In his last contest, Marquez lost a split decision to Timothy Bradley in a bid to win the WBO title.

The 33-year-old Alvarado is coming off an RTD 10 loss to Ruslan Provodnikov in October of last year and a 1-1 split with Brandon Rios prior to that.