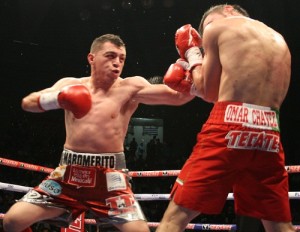 “El Maromerito” has won 10 straight since a close decision loss to Jose Lopez in 2011 and along the way defeated Omar Chavez twice, and won the interim WBC Youth World welterweight, WBC International Silver light middleweight, and WBC International Silver light middleweight titles. Harris is coming off a gift decision in October over prospect Danny O’Connor. The former light welterweight champion has only won twice since 2009.

3/22 – Merlito Sabillo (23-0-1, 12 KO’s) vs. Francisco Rodriguez Jr. (13-2-1, 9 KO’s) – Arena Monterrey, Monterrey, Nuevo León, Mexico
Sabillo defends the WBO minimum-weight title for the third time. The undefeated champ is coming off a draw with Carlos Buitrago last November, but won his five prior contests inside the distance. This is his second time fighting outside the Philippines. Rodriguez has never fought for a title, world or regional, but has won two bouts since being stopped by Roman Gonzalez in September.

3/22 – Humberto Soto 62-8-2, 35 KO’s) vs. Juan Carlos Abreu (16-0-1, 15 KO’s) – Polideportivo Centenario, Los Mochis, Sinaloa, Mexico
Soto, the WBC International Silver light welterweight and WBF welterweight champion has only lost once since 2008, but the stoppage at the hand of Lucas Mattyhsse can be forgiven. The former super featherweight and lightweight world champion is riding a four fight winning streak since that bout. Abreu sports impressive numbers, but the IBF Youth light welterweight title holder hasn’t faced anyone on the level of Soto. He’s coming off a six round draw last August.

3/22 – Anselmo Moreno (34-2-1, 12 KO’s) vs. Javier Nicolas Chacon (19-1, 4 KO’s) – Arena Roberto Duran, Panama City, Panama
The WBA Super World bantamweight title is on the line in this one. Champion Moreno has beaten the likes of Vic Darchinyan, Mahyar Monshipour, and Nehomar Cermeno (twice). In 2012 he lost a shot at the WBC super-bantamweight title, being outpointed by Abner Mares. He fought once in 2013, successfully defending his title against William Urina. Chacon is the former WBC Latino super flyweight champ, and is making his first appearance in a 12 round contest. In his only loss in 2008, he was stopped in two rounds by Raul Eliseo Medina.

3/22 – Odlanier Solis (20-1, 13 KO’s) vs. Tony Thompson (38-4, 26 KO’s) – Istanbul, Turkey
This is Solis’s fourth fight since a knee injury in the opening frame against Vitali Klitschko in 2011 kept him out of action for over a year. He won the IBF Inter-Continental heavyweight title in his first fight back and defended it in both of his following bouts. The 42 year old Thompson was thought to be down and out after his second knockout loss to Wladimir Klitschko in 2012, but back to back stoppages of British heavyweight hopeful David Price kept his career alive. He was comfortably outpointed by IBF International heavyweight champ Kubrat Pulev in an elimination bout. A win could have given Thompson a third match against Wlad.

3/22 – Derric Rossy (28-8, 14 KO’s) vs. Samuel Peter (34-5, 27 KO’s) – Emerald Queen Casino, Tacoma, Washington
After losing his last two bouts by knockout, Sam Peter disappeared for nearly three years. The former WBC heavyweight champ returns Saturday against Long Island based Rossy, who has also lost in his last two contests but has fought eight times while Peter’s been inactive. Rossy has been a regional title holder, but hasn’t had much success when stepping up to face world class opposition. Since 2011, he’s 3-6 with two of those being three round wins in the Prizefighter tournament early last year.