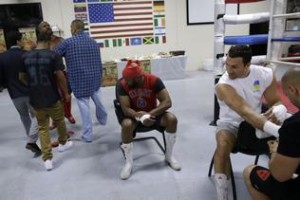 provided by a couple of the big boys, one of them still a viable contender of some sort, the other a washed-up ex-champion looking for some headlines.

First off, we had Anglo-Irish contender Tyson Fury getting upset at the opening press conference for his upcoming bout on July 27 with domestic enemy Dereck “Del Boy” Chisora.

Now, one can’t really blame Fury for feeling a little testy lately, what with David Haye cancelling a domestic megafight on him. So he got fed up talking about what he considers a setback for him, a rematch with Dereck Chisora, who he called a “high class journeyman.”

Then he left in a huff, saying, “Listen, I’m Tyson Fury, I’m the best heavyweight on the planet! This idiot is getting knocked spark out and I’m sick to death of this! This motherfucker is going to sleep!”

With that, Fury tipped over a table and left.

Chisora wondered if Fury should get a “Golden Globe” for his performance.

Also upset, for reasons only known to himself, was a relic from the past, Shannon “The Cannon” Briggs, who showed up in the gym where Wladimir Klitschko is preparing for his title fight with Alex Leapai of Australia. Briggs was also in a highly agitated state.

Perhaps Briggs is trying to prove he’s even more obnoxious than another faded heavyweight in his 40s, James Toney?

Or perhaps he’s trying to prove that he really did suffer brain damage when Vitali Klitschko pummeled him over twelve rounds in Germany, hospitalizing Briggs–who underwent multiple operations to repair facial fractures and a torn bicep, among other things–for two weeks.

Or perhaps Briggs is going for that Golden Globe by doing his best imitation of Rocky opponent Clubber Lang?

Or perhaps the slimmed down Briggs is really a walking advertisement for roid rage? He certainly seems upset, even throwing a shoe at the champion while Klitschko and his camp calmly ignore him, except for making a couple of droll remarks.

Briggs is the Kevin Trudeau of boxing, so no doubt he’ll be pushing some dodgy product or other if he can ever get himself a fight again.

Shannon the Scammer was scheduled to take on Kerston Manswell a couple of weeks ago, but failed to show up, apparently because he forgot to take the necessary tests to enter the ring.

Or maybe he had no intention of showing up anyway — with Briggs, one never knows. He tried to claim he hadn’t been paid for his pummeling at the hands of Vitali Klitschko, but when it was found that Briggs had spent most of his wages on large advances and taken a large posse with him to Germany to the fight, he was laughed out of court.

There’s only thing that is certain about Briggs is that the heavyweight division is better off without him at this point.