When Manny Pacquiao steps into the ring on April 12 against Timothy Bradley for a high-profile rematch and a shot at winning back the WBO welterweight title, the smart money will be on the Filipino icon. 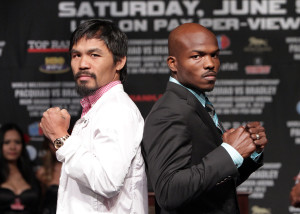 Online Sportsbook odds have Pacquiao the solid -225 betting favorite and, frankly, this is being rather conservative in this writer’s opinion. The reality is that Pacquiao should be a much bigger betting favorite at this point, especially when taking into consideration several key factors.

First, the vast majority of boxing fans believe that Pacquiao should’ve been given the decision in their June 2012 bout. Some experts had the fight scored as decisively as 11-1 or 10-2 in Pacquiao’s favor. Given conventional boxing wisdom that favors the winner of the first bout to also win the rematch, plus the fact that the lackadaisical Pacquiao of the first encounter will likely be replaced by a much more energized version, it’s only logical to assume Manny will come out on top.

Another factor in this high-profile rematch is the scoring. Two of the three judges in the first bout scored in favor of Bradley– and they suffered all of the bad press, fan hatred, and scorn that goes along with unpopular decisions. Will the next set of judges be willing to follow in the path of their predecessors should Bradley and Pacquiao engage in a number of close rounds? Again, the smart money is on the judges, this time, giving the benefit of the doubt on close rounds to Pacquiao.

Unless Bradley unleashes some hidden one-punch power that he’s failed to reveal in any of his previous thirty-one professional bouts, it’s also a good bet that Bradley won’t be able to knock Pacquiao out.

A best case scenario for Bradley has him outboxing Pacquiao with the aid of his natural athleticism and speed while Pacquiao presses forward. But even in this world of best case scenarios, it’s hard to imagine one where Pacquiao is not competitive and the bout isn’t relatively close.

So, that leaves the fight in the hands of the judges, who will be educated by the controversy in the first bout and cautious about not “screwing” Manny again.

Pacquiao promises renewed fire and killer instinct in this rematch and that can only mean bad news for Bradley, who was bested the first time by a Manny on cruise control.

While a case can be made that Bradley will be entering this bout with renewed confidence after a stellar 2013 and a chip on his shoulder about proving himself to be the better fighter, the reality is that he’s still probably a half-step behind Pacquiao in almost all areas.

Unless something crazy happens and conventional boxing wisdom is turned on its ear, Pacquiao will get the best of most exchanges, winning most of the rounds along the way, while Bradley stays just competitive enough to not be blown away. This time, though, the right fighter will get the decision.