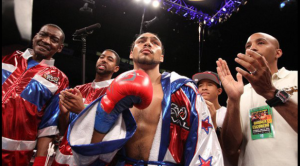 bout. The contest will headline a Showtime triple-header that will also feature Lucas Matthysse returning to the ring against John Molina and Omar Figueroa vs. Jerry Belmontes.

The heavy-handed Thurman scored a TKO 9 victory over Jesus Soto Karass in his last bout as co-feature on the Adrien Broner-Marcos Maidana undercard last December. The Clearwater, Florida native brings with him the WBA’s interim 147 lb. title, a belt he won in his July, 2013 contest against Argentina’s Diego Chaves.

The well-regarded prospect may be on the verge of breaking through to elite-level status and won’t likely be upset by Diaz in this upcoming match-up.

Originally from the state of Michoacan in Mexico, Diaz is tough and game, but will find himself competing at least seven years and two weight classes beyond his best against one of the sport’s young and hungry rising stars.