Hola and welcome home to the sweet perfumes of slowly simmering chicken broth scented with carrots, celery, onion and thyme. We are Panama’s number ONE quasi-food related weekly boxing column – The Sunday Brunch. This week we will be discussing the Manny Pacquiao-Timothy Bradley rematch that will be taking place 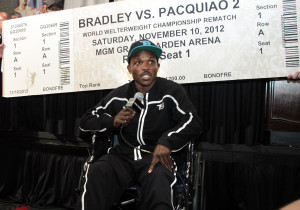 live from the mecca of modern boxing, inside of the MGM Grand Garden Arena, Las Vegas, Nevada, Earth. After that, I’ll show you what to do with that OXO Microplane that you got for your wife or girlfriend on some holiday or another. So bust out your blender and go back in time five years to cable modem for a better connection, we’re about to start the show. With that being said, I gave you your instructions in the dressing room, what I say you must obey – Cuidate, escucha me, toca los manos y buena suerte…Let’s get it on!

So Freddie Roach has sent Timmy Bradley some socks, eh? The gauntlet has officially been thrown to downtown Chinatown. When the two superstars last met on Max Kellerman’s HBO series (commercial) Bradley confidently and defiantly told Pacquiao and Kellerman that after carefully reviewing the tape he knows for certain that he won the contest eight rounds to four.

Boxrec.com has some interesting facts regarding the pair’s first encounter. Timothy Bradley was a 3.6/1 underdog on that evening, potentially meaning that some people “in the loop” could have gone home with a pretty healthy chunk of Russian Rubles, Philippine pesos, USDs and/or Chinese Renminbi.

Also interesting, in the same publication it was noted that “After the bout, in a review by five veteran judges commissioned by the WBO, Pacquiao was declared the unanimous decision winner.” Timothy Bradley couldn’t be stripped of his title, though, it would have made too much sense and the rematch had too much money to make.

In looking at the (oftentimes in the ballpark) CompuBox Punchstatas, for a Bradley victory to be feasible, some chicanery had to have been a-foot…(or a toe)…

Manny Pacquiao threw 191 fewer jabs than did the American, Bradley, while still landing 12 more – Final percentages were – 24%MP to 11%TB. That could possibly be misconstrued as Tim Bradley out-working Pacquiao, but let’s see what happens when we delve a bit deeper into this mathematical quandary.

In the power punch category (unfortunately meaning “anything that’s not a jab”) Pacquiao threw 103 more (likely harder) shots while maintaining an 82 connect lead – Final percentages were – 39%MP to 28%TB.

In the all-around, total punch category, Compubox had Manny Pacquiao throwing a total of 88 less punches, but somehow landing 94 more for a grand percentage of – 34%MP to 19%TB…

Now, I’m no Isaac Newton – I certainly did not derive infinitesimal calculus by age 26 and I definitely don’t know anything about the Infinite Series of Approximations or Cavalieri’s quadrature formula. However, I am well versed in what cow, dog and cat shit smell like. But, I digress.

“It’s either corruption or incompetence. There’ll be a rematch, it speaks to the corruption of the sport. The criminals will be rewarded.” Teddy Atlas – Now, Atlas doesn’t always have the most compelling (or sensical) things to say, but he always calls B.S. when he sees it. That’s why he’ll never have a job commentating for HBO or Showtime.

HBO’s Jim Lampley called it “The worst scoring he’s ever seen.” Also saying “Tim Bradley has scored an upset decision over Manny Pacquiao and only god knows how.” I’m sure there are a few other people who know how, Jimmy :wink wink:

The real piece of crapola here who’s infamously known for saying “Today I’m lying, tomorrow I’m telling the truth” had this to say about all the hoopla he created: “Can you believe that? Unbelievable, I went over to Bradley before the decision [was announced] and he said ‘’I tried hard, but I just couldn’t beat the guy.” Slithering on to say “I’m going to make a lot of money on the rematch, but this was outrageous.” These fantastical sound bites were obviously created by none other than promoter for both fighters, Bob Arum.

After the fight apparently a collection of scores were tallied from some fighters and “mainstream” boxing sites (AKA not blacklisted) and 121 out of 123 scored the bout for Manny Pacquiao. The two who didn’t score in favor of Pacquiao were “not American media”. Interestingly, the senile ‘grandmothered-in’ “judge” C.J. Ross is the same person who scored the Floyd Mayweather versus Saul Alvarez match a draw…

OK, team. Time to bust out your blender because I’m going to show you a ridiculously easy smoothie that will impress your family and friends, or if you don’t have either you can spike it with vodka or rum and make it bachelor worthy.

What you will need: 5-7 strawberries hulled (frozen preferably…I’ll explain later), the juice from one coconut, one power drill or screwdriver/hammer combo, one bright leaf of basil sliced at the last moment into ribbons and one lime.

First drill or somehow puncture one of the eyes of the coconut with CLEAN BITS for fucks sake, make two holes so the air will help drain it 50x faster. Pour this juice through a fine mesh strainer and into your awaiting blender. Next, if you have frozen strawberries you can omit ice from this recipe (which, depending on your filtration system, can possibly have a funky taste) and substitute a splash of ice cold purified Fiji water (or whatever you like).

So now your blender should contain coconut juice, strawberries one cup of H2o and the zest from that beautiful lime you picked out, here’s where your microplane comes in. Give your lime a good shave but don’t collect any of the white, bitter pith in your microplane. It works great upside down. Zest that whole mofo and then cut your basil leaf into very fine ribbons with an ultra-sharp knife so it doesn’t bruise and turn brown. You can add a touch of sugar if you’re so inclined, but it shouldn’t need it. Blitz and call me in the morning!

Thanks for joining us again this week, team. Next time we’ll be back with our official review of the Pacquiao-Bradley rematch and some other mathematical shit that’ll have your mouth watering. Until then, santé!