I find it truly offensive when experienced boxing “experts” pretend that the action in the ring is the only thing to consider when predicting a winner in a bout.

Ideally, it should be like that. When the Bears and the Packers play, on-field execution and depth of talent determine the winner ninety-nine out of a hundred times. In boxing, though, the better man doesn’t always win. Hell, a good number of times, the guy who actually wins the fight doesn’t get the win. One eye always has to be kept on the stuff going on everywhere but the ring. This is the business. And way too 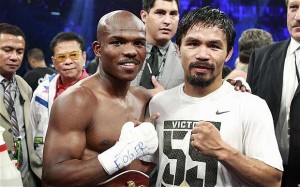 As a matter of fact, the whole basic structure of the sport has been put together with built-in escape hatches for when the story in the ring clashes with the monetary best interest of those in control.

“Believe it or not, the promoters pay the judges,” said former two-division world champ and TV commentator Bobby Czyz in a FightHype interview. “The judges are appointed by the commission and the promoter pays them. That’s part of his responsibility. Now, the sanctioning bodies, what they’ll do is say, ‘Any one of these 12 judges, we’ll accept’ because the sanctioning bodies have to accept the judges or they won’t sanction it as a title fight.”

None of this should come as a surprise to hardcore boxing fans, but it’s amazing just how infrequently this ugly fact is ever mentioned by the sport’s mainstream reporters.

So, to review: A promoter pre-approved list of judges is taken by the sanctioning body to the commission, which is also often filled with buddies and old cronies of the promoter, and, from that list, judges are appointed for the bout. The promoter then hands over payment to the commission in order to pay the judges.

Per Mitch Abramson of the New York Daily News:

…it’s the relationship between the judges and the promoters that should be examined.

In the dense world of boxing, judges who score these fights are on the payroll of the event’s promoter.

For appearances sake, the promoter hands the check over to the commission, who then delivers it to the judges.

But the result is the same: The promoter is paying the judge to make a decision in a fight the promoter has a financial stake in…This is outrageous. In no other major professional sport is a team owner responsible for the salary and housing of its officials.

You don’t see Yankees owner George Steinbrenner pulling up in a golf cart and cutting a check for “Cowboy” Joe West, or any other umpire. Major League Baseball handles that fiduciary duty. You don’t see James Dolan, who oversees the Knicks, waiting in a Garden corridor to pay Dick Bavetta.

With this type of system in place, the implication is very clear– score the fight the right way or you may not get that next big assignment. No easy paycheck, no paid vacation, no comp hotel room, no per diem, no adrenaline rush from being ringside at a big fight.

But what does all this have to do with Manny Pacquiao vs. Timothy Bradley this coming Saturday at the MGM Grand?

The last time Pacquiao and Bradley met we bore witness to one of the very few times in history that the house fighter got shafted to the benefit of the clear B-side. There are many explanations for why that happened and they vary from basic incompetence to things more dark and sinister. But it doesn’t matter why Pacquiao lost a fight he should’ve won by at least an 8-4 margin.

The thing is that, this time, it’s to everyone’s absolute benefit that Pacquiao wins. The thought of a victorious Bradley brings up the image of pennies rattling inside an empty coffee can. Nobody wants to see Bradley-Marquez II and fights like Bradley-Alvarado, Bradley-Rios, or Bradley-Provodnikov II are good tussles without any big money muscle.

Only a victorious and once-again dominant Pacquiao can help promoter Top Rank compete with an ever-expanding Golden Boy rival.

Because of what happened the first time, there will also be hyper-focus on the performance of the judges. Don’t expect Bradley to get the benefit of the doubt for any close rounds in this upcoming bout. Most likely, Bradley will have to go out and either totally dominate Pacquiao or knock him out to get the win.

Bradley hasn’t stopped anyone since he scored a TKO win over faded former lightweight champ, Joel Casamayor in 2011 and the odds of him utterly outclassing Manny on Saturday, even in an ultra-best case scenario, are extremely slim.

When all the math is done, Bradley will be walking into the ring with absolutely everything lined up against him. The judges, paid to work the fight by the very same promoter who absolutely needs a Pacquiao win, will also be subliminally (or not so subliminally) focused on not “screwing” Manny again. This will make it so that Bradley’s only chance at victory will be via some sort of previously unseen ability or never-before-achieved next level execution.

By hook or by crook, Pacquiao is being set up to win.

The Filipino icon can totally remove the stink of the set-up by going out there and beating the sand out of “Desert Storm.” And, for the sake of boxing, that could very well be the best possible scenario for all (except Bradley, of course). There’s also the possibility that Bradley could surprise the world and stamp his ticket to the Hall of Fame with a truly stellar and decisive victory. The third possibility, the least likely of all, is that the judges will actually score the fight with a fair, even hand and rise above the politics.

However, a close fight is expected and, unfortunately for boxing, that means the call will be made by the grinding gears of the machine.

I don’t say these things to be the fly in your ointment or the rat turd in your bowl of Rice Krispies. And by no stretch of the imagination am I making the case against boxing.

I want everyone to be conscious of the one single barrier that separates us from ever being able to reach the mainstream sports fan again.

Boxing is not taken seriously by the mainstream world because of all the silliness and perceived corruption in the sport. And many sponsors, also aware of this reputation, are slow to make the type of investment the sport needs to grow and reach even more people. The Toyota Corporation doesn’t want to hear: “…and this complete and total farce was brought to you by the Toyota Corolla: Style never goes out of style.”

Major, fundamental problems in our sport can never be addressed if everyone ignores them. It’s criminal that boxing writers, of all people, would choose to turn a blind eye to the very issues that are keeping this sport from true respectability. They know the business and it’s horrible incestuous regulatory structure, yet actively pretend that the problem is an overblown paranoid fantasy.

The argument will be made that fans just want to read about the sport and that it’s in the sport’s best interest to hype the events, rather than hurl criticisms their way. I know from my own dalliance with the mainstream that there is, indeed, a pressure to cheerlead rather than analyze.

But like the lax parents who make excuses for their rotten child’s behavior, we’re doing no good whatsoever by embracing denial.

There will be many Pacquiao-Bradley II previews that focus on the nuts and bolts of in-ring strategy and The Boxing Tribune will surely have one posted a little later on this week. But we can’t close our eyes and pretend that boxing is like every other major sport, especially in situations like this one.

The future of the sport depends on us making some very fundamental changes to how thing get done, but the first step is admitting that there is a problem. And, for whatever reason, that’s where we always seem to get stuck.