UK heavyweight giant David Price of Liverpool was, at this time last year, still reeling from being knocked off of his perch as “the next heavyweight champion of the world” after American veteran Tony Thompson shockingly stopped him in the second round of what was supposed to be another routine KO for the massive Scouse fighter. 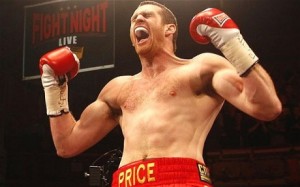 The disastrous decision to take on Thompson again for his next fight–again in his own backyard of Liverpool–instead of taking a confidence-building warm-up bout first cost Price heavily, as Thompson, miffed at being seen as merely “lucky” the first time out, survived a near-knockout, rising at the count of nine-and-a-half, to stop Price once again, this time in the fifth round.

From having admittedly bought into his own hype to some extent, Price was forced to do some serious soul-searching if he even intended to continue in boxing.  That search led him to dismiss his British promoter and trainer and sign on with Germany’s Sauerland Event.

Price’s first fight with his new team, in Germany against Hungary’s Istvan Ruzsinsky in January, was such an easy win–a laughable first round KO–that Price seemed almost embarrassed by it.

The comebacking Scouse power puncher (16-2, 14 KOs) is hoping for a little more resistance from his opponent this weekend in Denmark, Czech heavyweight Ondrej Pala (33-4-0, 23 KOs), as a way of measuring his progress since his disastrous 2013.

Pala’s record indicates that he should provide more pushback than did Ruzsinsky, at the very least.  To prepare, Price has been sparring with the man who is likely the best heavyweight in the world not named Klitschko, Bulgaria’s Kubrat Pulev, who is biding his time while the world champion Wladimir fights aspiring Australian Alex Leapai in a fight that many feel should have gone to the more deserving Bulgarian.

Price has sparred with Pulev previously, pre-Tony Thompson, and says he feels good about where his form is at this moment.

“It was good with Pulev and good to go back over there and test myself against someone who is at his level,” Price told the Liverpool Echo.

“Last time we sparred, I was heading towards the top of my game and going for the British title. I was probably in the form of my life at that point.

“So it was good to go over there and ask questions of myself after what had happened last year. And I answered them well and it has put me in a good frame of mind.”

The 6′ 8″ tall Price is now working with American trainer Tommy Brooks, who he says isn’t reinventing his style, but instead making “tweaks” and eliminating long-time flaws in the Price approach.

“He has been correcting basic mistakes that I have been making for a long time and I had not bothered to put right,” Price explains.

“He is on me every session and is ironing the faults out as well as adding to me.

“Tommy is not changing me as a fighter but just tweaking me.”

A win over Pala and Price will once again find himself in the conversation regarding possible future champs, as his 2013 debacles fade into history.

Another rising UK heavyweight, 6′ 6″ Hughie Fury (cousin of the more famous Tyson), will also be in action this weekend in a domestic clash against Danny Boy Hughes in London, England.

Not as prone to popping off on social media as his cousin, the more sedate giant Hughie (13-0, 8 KOs) has shown good improvement of late: his body punching against American journeyman Matthew Greer in his last outing was witheringly effective, putting a wincing Greer to the floor numerous times.

The 6′ 5″ tall Hughes (12-2, 3 KOs) is coming off of five straight wins, and may be a slight step up for Hughie.  His manager certainly thinks so, at least: “Danny is really up for the fight and has been badgering me to get it on,” says Phil Jeffries.

“He really fancies it –- and I wouldn’t put him in there if I didn’t think he had a chance – he’s go the tools to do the job.”

We’ll see about that, but it’s far more likely that Hughie Fury continues his quiet rise as cousin Tyson makes all the noise while rematching countryman Dereck “Del Boy” Chisora this summer, after twice being burned by David Haye injury cancellations.

THE DIAMOND BOY IN THE ROUGH RETURNS AGAINST THE KINGPIN

Speaking of fighters who have been burned by David Haye injury pullouts, Manuel “Diamond Boy” Charr (25-1-0, 15 KOs), one of the more colorful characters in the heavyweight division, will no doubt be sporting his bewildering array of various title belts as he steps into the ring with motor-mouthed American Kevin “Kingpin” Johnson (29-5-1, 14 KOs) in Bonn, Germany on Saturday.

Johnson, after a win over upcoming Wladimir Klitschko opponent Alex Leapai in Australia in 2012, has hit a rough patch, his trademark braggadocio not covering over losses to Tor Hamer, Christian Hammer, Tyson Fury and Dereck Chisora.

Charr, in contrast, is on a four-fight winning streak since he lost to then WBC champion Vitali Klitschko in 2012.

Given the momentum created by both men’s recent outings, it seems likely that the flamboyant Diamond Boy, who sees himself as a big stage heavyweight, will make it five in a row over Johnson, who seems to come into matches now with a sparring partner type mentality, putting in a bit of effort, then folding his tent, collecting his pay and heading home.