Raymundo Beltran (28-6-1, 17 KO’s) vs. Arash Usmanee (20-1-1, 10 KO’s)
Raymundo Beltran should have been the lightweight champion of the world, but a bum decision in Scotland last September left him with a disputed draw with WBO 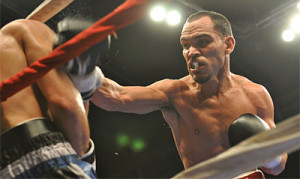 lightweight champ Ricky Burns. Burns has since lost the title to Terence Crawford and Beltran has the opportunity to grab the WBO NABF lightweight title when he faces Arash Usmanee in a scheduled 12 round contest.

Beltran is a solid fighter; the type of guy that makes his opponent work to beat him. He’s held the USBA and NABF lightweight titles and the WBC Continental Americas title as a super featherweight some years ago. He holds convincing wins over Alejandro Perez, Ji-Hoon Kim and Hank Lundy, and in 2011 lost a close decision to undefeated Sharif Bogere.

Usmanee has had two short stints as a regional titleholder: he won the NABA super featherweight belt in 2010 and the WBC Continental Americas lightweight title in 2012. Like Beltran, he’s coming off a draw in a world title affair last August when he fought Argenis Mendez to a split decision draw with the third card being scored in his favor. Prior to that, he had lost a 12 round decision to undefeated Rances Barthelemy in a bout many felt should have went the other way.

Allakhverdiev gained notoriety after beating former world champion Nate Campbell in 2011, and has been getting more exposure since. He followed up with a regional title win before beating Kaizer Mabuza and Joan Guzman to win the IBO and WBA straps. In his last outing he stopped former two-division world champion Souleymane M’baye in 11 rounds.

For Vargas, this is easily the best opposition he’s faced thus far. Until 2013 he hadn’t fought anyone special. His record holds a few familiar names like Vivian Harris and Steve Forbes, but their best days were behind them by the time they met Vargas. He led off 2013 with a step up in class against undefeated Wale Omotoso and won the WBC Continental Americas welterweight title in a fight that saw him dropped early, but come back to take a unanimous decision. In his last bout, he took a wide decision over Ray Narh.

This is the first title opportunity for Felix, who’s racked up an impressive 21 stoppages in 26 wins with 15 coming in the first two rounds. He’s stopped his last three opponents, including Santos Benavides, who went the distance with Vasquez in 2011.