On Saturday night, April 19, the latest appearance of ‘The Alien‘, formerly known as Bernard ‘The Executioner’ Hopkins (55-6-2, 32koes) took place in a boxing ring at the DC Armory, in Washington, DC, where Hopkins appeared, and worked his magic over Beibut Shumanov (14-2, 9koes) for 12 captivating rounds. When the dust cleared, ‘The Alien’ took off for home with the unified World Light-heavyweight title belts and Shumenov was left behind, wearing the sort of expression on his face that one would expect from someone who had just experienced a close encounter of the third kind. 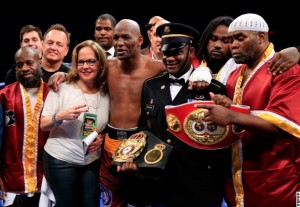 Both men were defending their respective World Light-heavyweight title belts, Hopkins with the IBF and Shumenov his WBA title, but from the beginning, it was Hopkins who dictated the action, in that special way that would be so familiar to Hopkins’ watchers. From the start, ’The Alien’ behaved like a champion, scolding a rebellious upstart, who had dared to challenge him. He made the Kazakhstan-born Shumenov come after him, while he picked his counters and avoided Shumanov’s slow, yet heavy, shots.

As the rounds went by, the fight formed a pattern, with Shumenov coming forwards behind the jab, but Hopkins blocked, dodged, and countered it. When Hopkins fired his own jabs, they inevitably landed. Now and then, he would add a right hand that would thud cleanly onto Shumenov’s features. Shumenov grew progressively more exasperated as the fight wore on, yet to his credit, never stopped trying to press the attack. Soon he was swinging punches with an increasing desperation. His problem was that ’The Alien’ was never there to be hit, or rather he was there, usually right in front him, but Shumenov, like so many baffled challengers of the past, just could not hit him cleanly. Hopkins blocked, slipped, and shuffled away again and again at the last moment. Occasionally, Hopkins walked off to the side, and regarded Shumenov, as if gauging the level of frustration he had provoked in his opponent.

By the halfway stage of the fight, Shumenov’s angst and growing bewilderment was palpable. He looked like a man who was trying to wake himself up from a slowly unfolding nightmare. When in the 11th round, a Hopkins’ right hand to the face floored Shumenov heavily. It looked as if ’The Alien’ had given way to ’the Executioner’ and Hopkins was about to score his first knockout win in nine years. Shumenov showed in this fight that he has a big heart and good stamina; despite taking some more clean shots from Hopkins after the knockdown, he kept his feet.

The last round saw Hopkins putting the final touches to his latest artistic masterpiece, landing some good shots, but still careful not to make any mistakes at this late stage of the contest. At the end, Shumenov wore an expression that said he still didn’t quite know what had happened to him and when the judge’s scores were read out it seemed that one of the judges had the same affliction. While Judges Dave Moretti and Jerry Roth both voted for Hopkins by scores of 116-to-111, judge Gustavo Padilla, with a vision that should get him an early vote for the ’blind mouse of the year’ award, ’saw’ the fight 114-to-113 for Shumenov. How Mr. Padilla saw Shumenov winning this fight is a puzzle all of its own. While some rounds were fairly close, Hopkins still won them. Going forward in a fight should not win you rounds when all of your punches are being dodged and blocked. As it is the other judges cards seemed closer than they should have been, considering Hopkins domination of the fight, and including the knockdown in the 11th round. The scoring of the judges made one wonder, what would have happened had Hopkins allowed the fight to be closer? Hopkins’ problem is that his style is hard for many to appreciate because it involves no flashiness, or dramatics. Much of his defensive work can be overlooked by the casual or the uninformed observer. The punches he blocks with his gloves and shoulder, or slips with a slight move of his head, can seem to be landing in some eyes. Then there are some who simply don’t care for the countering and defensive work and favour aggression, even when it is futile and impotent.

There are those who have disdain for Hopkins’ safety-first approach in the ring, want to see him cut loose, and go for a knockout when he has an opponent befuddled and beaten in front of him. These people fail to understand that Hopkins’ caution, especially at this point of his career, is part of his art. Hopkins is an artist, a craftsman, who has mastered the art of the sweet science to such a degree that he is able to beat world-class fighters at 49 years of age. Hopkins is no Robinson, Ali, or Sugar Ray Leonard; there is no flash about him, no blinding combinations or flashy footwork, but he has mastered the basics to a degree that perhaps neither of those aforementioned greats ever reached. He has worked out every move and uses the ring canvas like a chessboard; no punch is wasted, no move is made without a reason. Hopkins is a master of pace and psychology between the ropes. His opponents largely look bad against him because he makes them look bad. He uses their work against them, until after a while, they are unsure of what to do next, and look increasingly lost and aimless.

Hopkins’ greatest gift throughout his career has been his dedication and willingness to continue to learn, even when he is already a world champion. It is this attribute that has allowed him to morph from a boxer who was regarded as a knockout artist early in his career, to a master counter-puncher. Together, Hopkins’ defence and dedication has allowed him to preserve his physical skills to an almost uncanny level, alongside his accumulated experience, is what makes him the boxer he is today.

Even with modern boxing’s dual and triple etc. world titles, what Hopkins is doing inside the ring is little short of phenomenal. In the 1990s, George Foreman regained the World Heavyweight title at the age of 45 years old, Larry Holmes challenged twice for the World Heavyweight title in his early and mid-40s, and beat top contender, Ray Mercer at the age of 42 years old. Roberto Duran continued fighting until the age of 51 years old, (but not at such a high level as Hopkins has managed). Neither of these three ‘greats’ held and defended a genuinely recognised world title, at the age that Hopkins is now.

The one man whose longevity at world level comes closest to Hopkins is Archie Moore, the World Light-heavyweight champion from 1952 to 1962. Moore, who was a marvel by any stretch of the imagination, and one of the greatest knockout punchers of all time, defended his World Light-heavyweight title successfully for the last time in June 1961, against Guilo Rinaldi. He beat Rinaldi on points, at the age of either 47 or 44, depending on whether you believe his birth date of 1913 or 1916. (Moore’s mother always said that Archie was born in 1913, while Moore claimed he was born in 1916). Either Hopkins is, at least, two years or perhaps five years older than Moore was when he defended the light-heavyweight crown for the last time, before being stripped of the title in 1962 for lack of activity.

Although Hopkins is a very different fighter than Archie Moore, one thing that the two of them have in common (other than their reigns as light-heavyweight champions) is that they never stopped learning throughout their careers. Both of these fighters honed their skills in over two decades of fighting. Like Moore, Hopkins has learned from every fight he has been in, from every style he has fought, and in his own words, “I have seen it all.”

One aspect that puts Hopkins above all the previous fighters who have boxed past the age of 40, including Archie Moore, is the level of fitness that he has been able to retain into his late 40s. Even Archie Moore, for all his longevity, was known to blow up between fights. Hopkins maintains his weight when out of the ring and never allows himself to fluctuate between fights. It is a dedication, which has at least partly, helped Hopkins retain his reflexes and speed far beyond the age that most fighters’ skills have been irreversibly eroded by time.

Despite his recent acheivements, it is almost inevitable that some fans and members of the media will downplay what Hopkins has achieved and continue to dismiss him as a boring fighter involved in dull contests. This attitude is symptomatic of the mood in modern boxing today, which regards craftsmen such as Rigondeaux and Mayweather, as ’runners’ and dull. It has become shameful to be elusive, to use strategy and ring technique, rather than simply aggression and brute strength. These men, alongside Hopkins, are the last true world-class examples of the sweet science in its purest form that boxing has today, and there is every chance that they may be the last, if boxing continues down its present route of entertainment at all costs.

Bernard Hopkins built himself into a great boxer while Middleweight champion of the world for a record 10 years and 20 defences. At first, it seemed that his time at light-heavyweight would be a final golden flourish of a great boxer in his last years, but this final flourish is now almost a decade old. Yes, Chad Dawson beat Hopkins, but he seems to have outlasted Dawson, as well as all the others too. Now, Dawson is an ex-champion with an uncertain future, while Hopkins holds two of the 175-pound world championship belts.

Rather than being a final flourish, Hopkins’ achievements at light-heavyweight may turn out to be his crowning glory. This will certainly be more likely if Hopkins really goes through with his aim to try to become the oldest undisputed world champion ever. To do this, Hopkins will need to fight and unseat WBC champion Adonis ’Superman’ Stevenson and WBO title holder, Sergy Kovalev. Each man would pose a tough challenge for Hopkins, especially Kovalev, who has shown himself to be a simply frightening puncher so far in his career. Stevenson is also a very dangerous puncher and has shown some boxing skills in recent fights. If Hopkins were to beat either of these two fighters, let alone both, it would be an amazing accomplishment for the Philadelphian. Hopkins vs. Stevenson seems like it can and possibly will happen, especially now that Stevenson has moved over to Showtime, from Top Rank. Although Stevenson is over a decade younger than Hopkins and an athletic big puncher, ’The Alien’ may have too many tricks, both physical and psychological, for the dangerous, but somewhat erratic, Stevenson. Who better to take on ’Superman’, than ’The Alien’, in what is sure to be a confrontation of galactic proportions!

Will even ‘Superman’ be able to handle the strange and mysterious powers of ‘The Alien’.