Lopez, still looking to rebound from a hellacious one year stretch in 2012-2013 that saw the overachieving battler sustain some major damage, is fighting his second straight tune-up bout and hoping for a return to the main stage soon. Brutal TKO losses to Saul Alvarez and Marcos 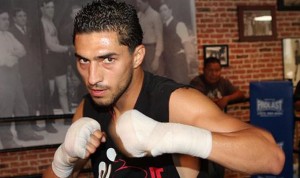 Maidana, as well as an equally taxing RTD win over Victor Ortiz put Lopez through the wringer and aged him beyond his actual 29 years. There’s a possibility that Lopez may never return to where he once was after such a tough run and, if this is the case, there really is no such thing as a soft touch for the Riverside, California native from here on out.

In his last fight, back in December, Lopez was dropped once and looked relatively frail in a bout with veteran journeyman, Mike Arnaoutis. An accidental headbutt would lead to a technical decision victory for Lopez, but nobody looking on was convinced that Lopez was “back.”

Now taking on Aaron Martinez of Uruapan, Michoacan, Mexico by way of East Los Angeles, Lopez faces a tough, veteran opponent, albeit one with not much one-punch power.

Consider this a road test to see if Lopez is really ready for a return to the Golden Boy welterweight expressway. If the answer is “yes,’ then expect him back in the mix, possibly serving as a litmus test for another batch of young welters.

For what it’s worth, Martinez, who is coming off a one-year layoff, claims to have added a significant amount of power thanks to a newly-implemented strength and conditioning regime. If he can beat Lopez, we just may see him as the new blue collar Golden Boy prospect tester.