There’s good news and bad news to be had this Saturday at the StubHub Center in Carson, California.

The good news is that three of the sport’s best offensive fighters will be on display in a Showtime triple-header.

The bad news is that there’s a distinct possibility that all three televised bouts will be ugly mismatches. 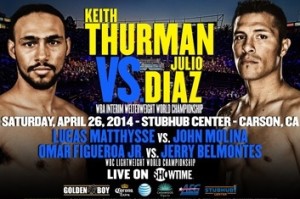 Make no mistake about it, the 34-year-old Diaz is a tough SOB who will be in Thurman’s face for as long as the bout lasts. Unfortunately, coming in seven years and two divisions past his prime against a hungry, heavy-handed 25 year-old Thurman will likely mean that the bout won’t last very long at all.

At any rate, all those involved in putting together this match-up should hope for a quick, merciful end and not an ugly, sustained beating. This is clearly a bout made to add another monster knockout to Thurman’s sizzle reel, but it could very well come to an ugly end if Diaz’s crumbling house doesn’t fall to the wrecking ball as cleanly as imagined.

In the co-feature, Lucas Matthysse (34-3, 32 KOs) looks to rebound from his unanimous decision loss to Danny Garcia last September by beating the tough, heavy-handed, but otherwise pedestrian John Molina (27-3, 22 KOs).

Of all the underdogs on this card, Molina probably has the best chance at pulling off an upset due to his one-punch power and tenacious ring attitude. Ultimately, though, Matthysse is just so much more talented and even heavier-handed than Molina. Unless the Garcia loss somehow messes with his psyche, expect Matthysse to pummel Molina until Molina eventually breaks down.

Figueroa is coming off a hand injury sustained in his classic battle with Nihito Arakawa last July, but should be able to walk through a mid-level talent like Belmontes.

Belmontes reportedly holds several amateur wins over Figueroa and is not without ability, but, as a pro, he has lost three of his four attempts to step up in class and the pro version of Figueroa is infinitely better than anyone he has faced as a pro.

This Showtime triple-header will be televised live, this Saturday (April 26), starting at 9:30PM ET/PT.