Hola amigos y familia, welcome to Argentina’s Sunday Brunch – The most widely talked about, most irradiated boxing podcast South-East of the Mississippi and West of Chernobyl; we are the reason that Night Court is no longer on air. This week we’re talking about the fight of the year candidate that took place Saturday night. 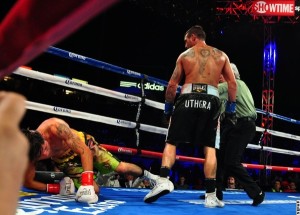 Also on tap: Are we alone in the universe? We talk to Doctor Neil deGrasse Mike Tyson about global thermal nuclear war and what was it like having his own video game in the 1980s…Strap on your fancy boots and wrangle up some newly unearthed copies of E.T. for Atari that were discovered in America’s desert, we’re about to start the show. With that being said, I gave you your instructions in the dressing room, what I say you must obey – Cuidate, escucha me, toca los manos y buena suerte…Let’s get it on!

Lucas Martin Matthysse and John John Molina both should be commended for not only displaying incredible sweet chin music, but to be able to go out and put on that kind of a back and forth war, throwing such a huge amount of punches for most of their 11 round bomb-buffet – that was surely something that both men needed to show at this point in their respective careers.

A feeling out round one began this story, both men pawing out with their jabs to try and find a home for their right hand early…Both fearless and confident of their own power. Most of the California crowd cheering for every punch that John Molina would throw.

He would land a hard one in the second round that would put Lucas Matthysse “on queer street” as my friends say over in the U.K. like to say…

After being down from a sneaky right cross by John Molina as he was backing away, The Machine wisely began holding to smother some of the Californian’s good work. Matthysse, obviously feeling extra pressure from the accidental clash of heads he sustained in the third round and with nearly 45 seconds left in the frame, came back from the ringside doctor’s visit with a renewed sense of urgency.

Of course, since John Molina was much taller and with longer reach than had Lucas Matthysse (also with a much bigger head…ironically, coming in fight night a few pounds less than his more experienced foe), the former lightweight used every bit of his ranginess to set his opponent up with lunging jabs followed by his reaching overhand clubbing right.

Towards the end of the fourth, La Maquina felt comfortable enough with the way things were going to start to throw in combination, catching John Molina up against the ropes several times. After trading some hard punches (and a couple of shoulders, forearms and headlocks), Molina was able to catch the Argentine behind the head and Pat Russell called a second knockdown in his favor — prompting the bustling crowd at the StubHub Center in Carson, California to roar in approval — also causing both men to fight well past the sound of the bell.

Discovering that his left hand could be just as accurate and useful against the man from Covina, California, Lucas Martin Matthysse again began unleashing powerful combination punches, occasionally trapping The Gladiator on the ropes until a nice right hook caused his knees to momentarily buckle.

Later on the pace really began to pick up in the eighth when the punishing accumulated body and head blows finally put John Molina on the canvas (with a little help from a friendly shove) for the first time. The already ravenous crush of humanity piled in around the two men in the co-main event going even more berzerk at the titanic effort both men registered thus far.

Towards the end of the ninth frame, the Teamster-sponsored John Molina really began looking gassed, though throwing significantly less shots than had Matthysse – the cumulative body punches and uppercuts chopping him down to the Argentine’s size.

An incredible 10th round submitted by Lucas Martin Matthysse — smothering, shouldering and spattering blood on the ringside camera — bombing Molina every step of the way. It was unbelievable the amount of punishment that John Molina was able to take before eventually being stopped by the Herculean shots from the new continental Americas WBC junior welterweight champion (insert sanctioning fee joke here).

Fight of the year so far? I think probably that’s a safe call, but there are so many other potentially excellent matchups coming still this year: Alvarez – Lara, Mayweather – Maidana, Cotto – Martinez …and let’s not forget about unified heavyweight world champion, Wladimir Klitschko’s big win on Saturday against Alex Leapai.

There are also other possible fights that I’d love to see like the IBF welterweight champ, Showtime Shawn Porter against the (obvious) winner of last night’s main event, Keith Thurman. Both of those fighters are handled by Al Haymon so that shouldn’t be hard to make, unless they would rather milk some softer challenges first.

Regardless of who wins on May 3rd (Floyd Mayweather TKO inside 10), I would enjoy seeing the two Argentinians go at it – Maidana versus Matthysse, but most likely (since Golden Boy’s mouth-piece, Richard Schaefer mentioned it) it will most likely be Adrien Broner who gets to nod against the WBC titlist next.

And with that, I’d like to share my secret to making the ubiquitous accoutrement served with most meat dishes in Argentina, chimichurri sauce! What you will need: 1 cup olive oil, 5 cloves of garlic – minced, ¼ cup white vinegar, ¼ tsp red pepper flakes chopped into little pieces with your kitchen knife, 2 cups of fresh parsley and ¼ cup fresh oregano … sea salt and black pepper to taste.

If you don’t have a food processor (I don’t), you can feel free to place all items in either your blender or on your cutting board and chop away until you achieve a nice paste…If you opt to use your blender add your olive oil last in a thin stream to make an emulsification, if not, put all of your ingredients into a large bowl and whisk until incorporated. Taste, season and taste again…re-season if necessary. Place in fridge and let chill for 3 hours up to two days for the flavors to really combine. Feel free to add this wonderful paste to almost anything you make, it’s wonderful with meat, potatoes and vegetables.

Thanks for joining us again this week, next time we’ll surely have coverage of the big fight going down in Las Vegas, Nevada, Earth, when Floyd Mayweather takes on Marcos Maidana live from the MGM Grand Garden Arena!