StubHub Center, Carson, California– An anticlimactic mismatch in the main event between Keith Thurman and Julio Diaz was easy to forgive after two entertaining co-features on Saturday night’s triple-header on Showtime.

Predictably, the evening’s welterweight main event saw a 25-year-old Thurman (23-0, 21 KOs) hitting a well-worn 34-year-old Diaz (40-10-1, 29 KOs) hard and often, forcing Diaz to take a knee in the second round and his corner to stop the fight after the third, claiming a rib injury. 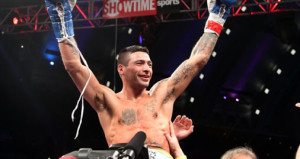 Thurman, who continues to add pieces of skill and guile with each fight, showed some educated movement with his one-punch power and is quickly turning into one of the top young stars in the sport. To be honest, though, even a less-than-complete effort from Thurman would’ve likely been enough to handle the former two-time lightweight champion, who was tough and determined, but entirely out of his league.

The card’s co-feature, however, made up for all of the main event’s shortcomings.

In a bloody, all-action war and instant Fight of the Year candidate, Lucas Matthysse (35-3, 33 KOs) stopped John Molina (27-4, 22 KOs) in the eleventh round of a twelve-round junior welterweight bout.

Things started well for the heavy-handed Molina, who buzzed Matthysse in the first hand and scored a knockdown in the second. A clash of heads opened a cut over the Argentine’s left eye in the third and another knockdown in the fifth momentarily stopped Matthysse’s plans to rebound from a pretty bad start.

But after that second knockdown, Matthysse was all “Machine” as he ripped shots to Molina’s body and rattled his head with well-placed lefts and rights.

Covina, California’s Molina fought back ferociously while bleeding from a cut on the back of his head. He tried in vain to land another big, momentum-changing bomb, but Matthysse had learned to defend against Molina’s big, cuffing blows with a combination of subtle movement and clinching up close.

With his heavy hands nullified and his energy being sapped by the rabid pace of the bout, Molina was running on little more than courage and fading hope by the eighth round.

In the eighth, Matthysse sent Molina to the canvas for the first time in the bout and in the tenth, he did it again. While the underdog was able to beat the count in the tenth and get out of the round, it proved to be just a matter of time before Molina would be put away for good.

An offensive surge from Matthysse seconds into the eleventh round caused the referee to correctly wave off the contest.

Belmontes made this a closer than anticipated bout by using movement and generally befuddling the brawl-minded Figueroa. At the end of the day, though, Figueroa’s dogged pursuit of the challenger earned him the decision from two of the three judges at ringside.