Khan may have lost out on his chance at the big money fight with Mayweather, but at least he got a slot on the show. The former light welterweight champ is still in the rebuilding process after back to back 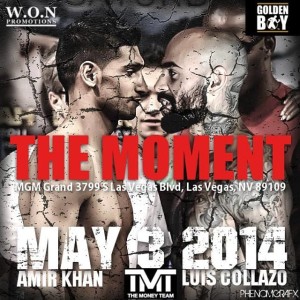 losses to Lamont Peterson and Danny Garcia. Since the pair of defeats he’s racked up a pair of wins, winning the WBC Silver light welterweight title when he stopped then undefeated Carlos Molina in 10 rounds, and a year ago he squeaked by Julio Diaz with a close decision after being dropped early in the fight and surviving a late turnaround by Diaz. His less than impressive performance in that bout is one of the reasons he wasn’t well received as a possible opponent for Floyd. He makes the move to welterweight against Collazo, who holds the WBA International welterweight title. The Queens native has fought some of the top names in his division, and hasn’t been stopped since 2002. His losses to Ricky Hatton and Andre Berto were razor thin, and in January he put himself back in the spotlight with a second round knockout of Victor Ortiz, who was also rebuilding after two straight losses. It’s a tough task for Khan, who hasn’t had the one punch knockout power he showed as a young lightweight, and has been known to falter late when his fights move past the middle rounds. Collazo on the other hand, is the naturally bigger fighter and comes in off the biggest win of his career. A win would open a lot of doors for Collazo while a loss, or even a shoddy win, could put Khan on the sidelines.

With a Maidana rematch out of the picture for now, the light-hitting Molina makes sense for Broner. When the former three-division world champ was manhandled by Marcos Maidana last year, there’s no doubt his confidence was shaken. Like him or not, Broner’s a tremendous talent, and still has a lot to offer if he’s put back on track, and that’s exactly why Molina was chosen. A former WBO Inter-Continental lightweight title holder, Molina was basically shut out against Amir Khan before being stopped in the 10th round when the two fought over a year ago. Not known as a heavy handed fighter and not nearly as fast as Broner, he poses little threat and should allow Broner to get some good work in.

A little over three years ago, the Boxing Tribune interviewed Love when he had just a handful of pro fights under his belt (you can read that 2010 interview HERE). Now, the Michigan based super middleweight remains undefeated and continues to focus on bigger things since his title winning effort over Gabriel Rosado last year was changed to a no contest when Love tested positive for a banned diuretic. He’s scored two knockout wins since then, stopping Lajuan Simon and Vladine Biosse, both former regional champs. Periban holds the NABF super middleweight title, though the belt isn’t up for grabs in this contest. He lost a close decision to Sakio Bika last June in an attempt at the WBC world strap and followed up with a 10 round draw with Badou Jack in September.