Hola team and welcome to a highly contested spicy Sriracha flavored episode of Chengdu, China’s number 8 most outlawed boxing show in the country, The Sunday Brunch – We are the lost puzzle piece that completely screws up “puzzle time” with your grandparents. This week we’re chopping up the Mayweather – Maidana fight that took place from the MGM Grand Garden Arena in Las Vegas, Earth. We’ll also be touching on some fight math, paella recipes and we’ll take a look at the highest rated Walking Dead toys on the market where we’ll put them to the drop test…Try not to saw your hand off in anticipation, we’re about to start the show. With that being said, I gave you your instructions in the dressing room, what I say you must obey – Cuidate, escucha me, toca los manos y buena suerte…Let’s get it on! 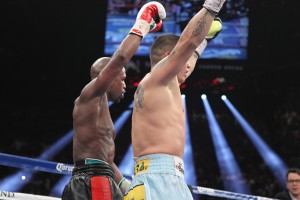 Another money spinning Floyd Mayweather Pay-Per-View is officially in the books as The Moment came and went and some in the land of social media were immediately calling for the retirement of the undefeated Las Vegas resident after his second majority decision in a row.

In his last bout, Mayweather totally dominated the thoroughly qualified, yet thoroughly outclassed Saul “Canelo” Alvarez, however was awarded an undeserved majority decision (it should have been unanimous…C.J. Ross, put down those doilies, I’m looking at you).

If you aren’t familiar with the term, a majority decision is when one judge somehow scores a draw bout while the other two turn in cards with one person winning. This time, even though the judges were all over the place, one would be hard pressed to really argue with them as Floyd Mayweather was more or less all over the place himself against the supremely confident and very hungry (17 pounds extra hungry on fight night) Marcos Maidana.

The Boxing Tribune’s own commander in chief, Paul Magno had this to say in his prediction: “Maidana’s wide, wild, cuffing punches may actually be an asset in this fight and could, conceivably, do some damage to a Mayweather accustomed to ultra-orthodox fighters like Canelo Alvarez. Maidana will also likely be pursuing and throwing meaningful punches for the entire fight.” The fight, as it turned out, played out almost exactly like that. Marcos Maidana spent a majority of the contest in hot pursuit of the defensive minded Mayweather, while not being too shy to administer some less than kosher tactics when Floyd backed himself up to – or was backed into – the ropes.

In fact, there were times in between rounds where his trainer, Robert Garcia can be heard telling Chino Maidana to get dirty in Spanish. Of course, when Mike Tyson was asked several months ago how he’d deal with a Floyd Mayweather his response was “You have to fight him dirty, he’s just too good…” which is quite true from a classical boxing standpoint.

Floyd Mayweather knows so much about boxing that Maidana’s unorthodox angles and shot selection completely threw the undefeated star for some of the match. Marcos Maidana’s overhand right that he found so much success with against Adrien Broner morphed into kind of behind the head cuffing straight down bash (reminiscent of a certain version of former heavyweight titlist, Sam Peter). While the Argentine definitely showed some underrated hand speed, his tactics against the aforementioned “baby bro” were more commendable, though, as he did quite a bit of hitting behind the head and other questionable techniques – It looks like Victor Ortiz’s head butting started quite a trend!

Saturday’s fight marked the first time in a long time that Mayweather fought three times inside of 12 months. One would assume that such activity would make him all the more sharp, but it appeared that, despite being in phenomenal condition, maybe he wasn’t mentally ready for the hell that Maidana would bring his way…which got me thinking, what’s with all the people just pronouncing his name like “Madonna” now?

Marcos Maidana managed to land more leather on Floyd Mayweather than in any of his previous bouts tracked by Compubox, but let’s take a look behind those numbers, shall we?

Mayweather landed 34% of his jabs on Saturday night, some 52 out of 152 connected shots while Maidana was successful just 11% of the time, connecting 36 out of a whopping 318 attempted.

If you add up the total shots scored and missed by each fighter, FM brandishes an impressive 54%, registering 230 total landed out of 426 to MM’s 26%, or 221 from a staggering 858 attempted – had Maidana’s accuracy been sharper we’d have likely seen a changing of the guards. Even though Mayweather’s lauded defense has taken him to unbelievable heights in the boxing world, that volume along with his unorthodox delivery system coupled with more accurate punching would lead to the defeat of just about anybody.

What was with those clowns? Where they part of the whole May Vinci Code?

Whether or not Floyd Mayweather will give his toughest opponent in many years a rematch remains to be seen. Odds are good that Mayweather won’t want that kind of a matchup in his next outing.

On the undercard, Adrien Broner looked slightly less than impressive (but as cocky as ever) in defeating an overmatched Carlos Molina. Broner even went as far as administering an intentional bodyslam, but was somehow spared a point deduction. After the bout Broner, reaching for a lottery ticket, called out Manny Pacquiao of all people. Even at this late stage of Pacquiao’s career I’d still favor him to trounce the Cincinnati native…How about calling out Ruslan Provodnikov?

Amir Khan fared better against his opponent, Luis Collazo, yet still managed to apply 4,000 blatant headlocks with just one point being taken away for his trouble. The Olympian did, however, manage to win a wide decision over the Brooklyn born boxer, who did away with boxing midway through their encounter and tried his hand at stalking with his hands down. This switch of tactics made the fight a bit more watchable and exciting, but it ultimately fell right into the gloves of Khan who pot-shotted and headlocked Collazo all the way to a big win.

In honor of the Mexican National Anthem that was curiously played while Argentine (with a Mexican trainer), Marcos Maidana made his way to the ring, we are going to be delving into a traditional Spanish dish known as Paella for our meal time today.

What you will need: 1 yellow onion diced,  2 tomatoes diced, 1 can of broad beans, 1 can of string beans (not French style), 1 can of garbanzo (chick peas) beans, 1 lemon cut into segments, 1 package of Bomba or Valencia rice (Vigo saffron rice may be substituted, but the result will be different in texture, much like attempting risotto with long grain rice), a healthy pinch of saffron threads, fresh parsley, white wine and chicken or vegetable stock and chicken if so desired. Canned stock is fine, if you’d like a recipe for homemade chicken or veggie stock or if you’d like to know how to use dry beans instead of canned, email me for the details.

First, in a separate pot put your stock up to simmer and drop in your saffron threads to infuse. Season with sea salt and black pepper to taste. In your paella pan, begin with a healthy glug of your favorite extra virgin olive oil and place your chicken pieces in the pan, cooking until the meat is 80% finished with a nice color on the outside of it. Remove and set aside.

In the same pan, drop your diced onions in and stir until they become translucent. Add a splash of the wine to deglaze the pan. Add in your tomatoes and give it a stir, after two minutes or so add in your raw rice. Cook (stirring all the while) until the rice becomes slightly crispy in appearance and sound.

Slowly start adding in your saffron infused stock while you stir. As the rice absorbs the broth add more. Repeat this process until you’ve used about 1 quart total (only slightly more than the rice you have, no more). Now place your remaining vegetables and beans in your dish and stir to combine. After about 15 minutes on low heat, add your chicken pieces to the top and push into the rice slightly.

Place your paella pan carefully in a pre-heated oven set to 325 and let set for around 35 – 45 minutes. It’s important to taste the rice as it comes out to make sure the texture and flavor are where you want it. Finish with some freshly squeezed lemon juice, a sprinkling of fresh parsley and garnish with the lemon wedges and Viola, time to bust out the sangria!

Thanks for joining us again this week, stop by next time when we’ll be discussing the finer points of macramé with special guest C.J. Ross. For all recipe or random questions, please email me at JESSEBOXINGTRIBUNE@GMAIL.COM or, pretend we’re friends on Twitter @JESSEBOXING. Until next time, santé!